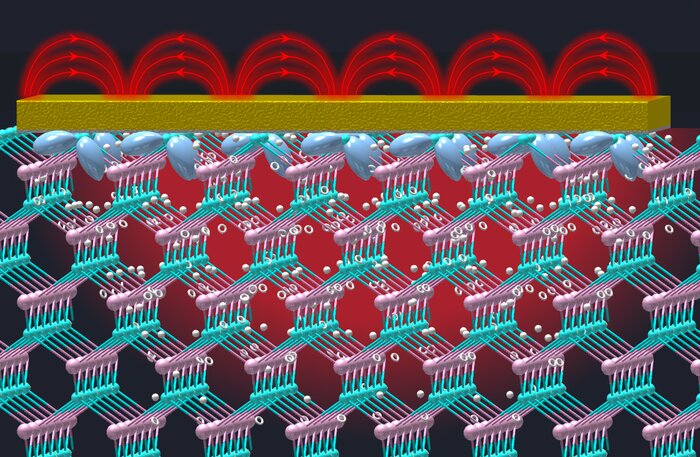 Schematic of InAs Lattice in contact to a nanoantenna array, which bends the incoming light so that it is tightly contained around the semiconductor's shallow surface. Photo-excited electrons are accelerated by the giant electric field that is created on the semiconductor's surface. They then release the extra energy gained by radiating it at various optical wavelengths. Credit: Deniz Turan/UCLAUCLA Samueli School of Engineering's electrical engineers have created a more efficient method of converting light from one wavelength into another. This opens up the possibility of improving the performance of imaging, sensing, and communication systems.Mona Jarrahi, professor of electrical and computer engineering at UCLA Samueli, led the Nature Communications-published research.It is essential to find a way to convert wavelengths from light in order to improve many imaging and sensing technology. Converting incoming light into terahertz wavelengths, for example, allows imaging and sensing to be done in optically opaque areas. Previous conversion frameworks required complex and bulky optical setups and were therefore inefficient.The UCLA-led team has devised a solution to enhance wavelength-conversion efficiency by exploring a generally undesirable but natural phenomenon called semiconductor surface states.Surface states are when surface atoms don't have enough atoms to bond to. This causes a break in the atomic structure. These "dangling" chemical bonds, also called surface states, can cause problems for the flow of electric charges through semiconductor devices. They also affect their performance."There have been many attempts to suppress the effect on surface states in semiconductor devices, but they have unique electrochemical characteristics that could enable unimaginable device functionalities," stated Jarrahi of the UCLA Terahertz Electronics Laboratory.Microscopy, photograph, and scanning electron microscope images of a fabricated array of nanoantennas placed at the tip a fiber for optical to terahertz wavelength conversion. Credit: Deniz Turan/UCLAThese weak bonds create an electric field that is both shallow and large across the semiconductor surface. The researchers therefore decided to use surface states for better wavelength conversion.Incoming light can strike the electrons within the semiconductor lattice, causing them to move to a higher energy level. At that point, they can freely jump within the lattice. These high-energy, photo-excited electrons are further accelerated by the electric field that is created on the semiconductor's surface. The extra energy is then released to different wavelengths and converted into light.This energy exchange cannot occur at the semiconductor's surface and must be made more efficient. The team devised a nanoantenna array to solve the problem. It bends the incoming light so that it is tightly contained around the semiconductor's shallow surface."Through the new framework, wavelength conversion occurs easily and without any additional source of energy as incoming light crosses it field," Deniz Turan, lead author of the study and member of Jarrahi’s research laboratory, said. He recently received his doctorate of electrical engineering from UCLA Samueli.Researchers successfully converted a 1,550-nanometer wavelength beam of light into the terahertz spectrum. This spectrum covers wavelengths from 100 micrometers to 1 millimeter. The team demonstrated the wavelength-conversion efficiency by incorporating the new technology into an endoscopy probe that could be used for detailed in-vivo imaging and spectroscopy using terahertz waves.This breakthrough in wavelength conversion would have required 100x more optical power to produce the same terahertz waves. The thin optical fibers in the endoscopy probe are not able to support this level of optical power. This breakthrough can also be applied to optical wavelength conversion in the other electromagnetic spectrum parts, such as microwave and far-infrared wavelengths.Further exploration: Explore optical network shapes pulses lightAdditional information: Wavelength conversion via plasmon-coupled surfaces states, Nature Communications (2021). Information from Nature Communications Wavelength conversion using plasmon-coupled surfaces states, Journal (2021). DOI: 10.1038/s41467-021-24957-1
semiconductorconversionenergyuclawavelengthengineerssurfaceenhanceopticalterahertzlightwavelengthsbend
2.2k Like