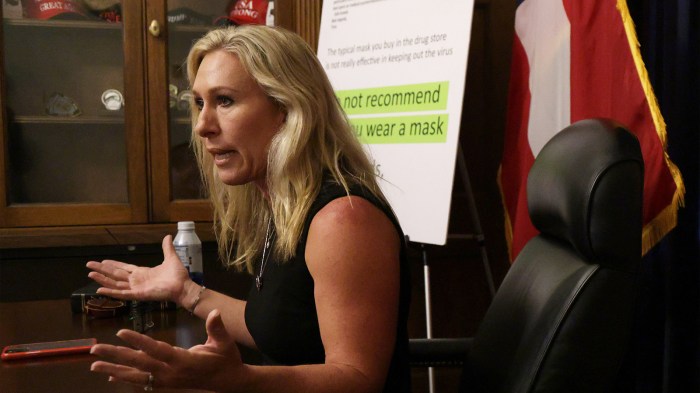 This column examines the origins of factually questionable comments made by public figures. We discuss their claims, the evidence (or lack thereof), and where they came from.Who said that?Marjorie Taylor Greene, Republican Representative from Georgia, tweeted the following on July 19. There have been 6,000 deaths from vax and numerous side effects. The vax should not be forced on anyone. Twitter banned her account for 12 hours for misleading the COVID-19 misleading information policy. Greenes claims of 6,000 deaths due to vax and the fact that COVID-19 does not pose a danger to people over 65 or obese are false. There have been 6,207 deaths from the COVID-19 vaccine among the 163 million Americans who have received it. However, there is no evidence that these deaths were due to vax.Some backgroundResearchers have been studying the possible comorbidities that might make someone more susceptible to severe COVID-19, which could result in death or hospitalization since the beginning of the pandemic. It is clear that someone who has been overweight or over 50 for the past year is more likely to contract COVID-19. There are many other conditions that can make you more susceptible. The CDC lists 17 types of cancer, including pregnancy and chronic lung disease. COVID-19 can cause serious illness in otherwise healthy individuals, and even death. It is absurd to claim that novel coronavirus does not pose a danger to anyone who isn't overweight or 65 years old. Obesity is the main risk factor for severe COVID-19. This trend is common among right-wing communities. It combines two threads of right-wing subcultures. The anti-vax community believes that healthy living and a natural immune system are equally effective in preventing illness. And the right-wing troll culture's long obsession with fat shame.Greene clarified her statement at a press conference regarding the Twitter ban. She said she was referring to the highest number of deaths, highest risk factor, and that 78 per cent of those who were hospitalized or died were obese. However, there are some caveats. This figure does not include people who are obese or overweight. According to the CDC, 73.6 percent are overweight or obese and 20-year-olds or more are included in this statistic. The numbers of people with obesity are higher in COVID-19 patients who have been hospitalized, required a ventilator, or died. However, Greene's stat is similar to a surveying COVID-19 women at a sorority house, where 100 percent of hospitalizations were female. This is not taking into consideration that the body mass index, which is used to diagnose obesity, is imperfect at best.Obesity is a major risk factor for COVID-19 infection. According to a meta-analysis published by Obesity Reviews in August, obese patients with COVID-19 are 113 per cent more likely than people of healthy weight to be admitted to hospital, 74 per cent more likely be placed in intensive care, and 48 percent more likely die. However, obesity is not the only risk factor for COVID-19. According to the World Health Organization, smokers have a 40-50 percent greater risk of dying from severe COVID-19-related diseases than non-smokers. According to a University of Iowa study, people with Parkinson's disease and COVID-19 have a 30% higher chance of dying than those without Parkinsons. According to the CDC, pregnant women who have COVID-19 are 70% more likely to die than their unaffected counterparts.Greene did not tweet that COVID-19 is safe for people who don't smoke, aren't pregnant, or have Parkinsons disease. She specifically mentioned obesity, which many right-wing online communities have done since the outbreak of the pandemic.Where did the comment come from?The online community has a common theme: people who are overweight or obese are the only ones at risk of severe COVID-19 infection. Although other risk factors may be mentioned from time to time, the focus seems to be on obesity. There are many posts on patriots.win about obesity being a risk factor in COVID-19. Many of these posts are looking at news reports of deaths in order to make an informal diagnosis. Her son would have been killed if she had gotten the vaccine. One post shared a screengrab from a Daily Mail article that featured an Alabama mother who regretted not getting her son, who died from COVID-19, vaccinated. The post states that even vaccines do not protect vulnerable people.The CDC's finding that 78 per cent of COVID-19 hospitalized patients were overweight or obese made this statistic a popular (and often misquoted!) datapoint in anti-vax and right-wing communities online. Jordan Sather, a QAnon influencer shared a video in May with his tens or thousands of followers on Telegram of New York City Mayor Bill de Blasio promoting vaccinations. Many replied with incorrect quips about COVID-19 only affecting obese people. They don't know that 90% of people who were hospitalized for COVID were obese. One follower said that they don't believe in science. Are 80 percent of C19 deaths caused by obese people? Hmmm, another.Right-wing groups have been fat-shaming people online for years. One example is the large number of subscribers to the banned subreddit, r/fatpeoplehate. This subreddit was created to mock and critique overweight people. They then moved to the also-banned subreddit, r/The_Donald where Trump supporters shared right-wing memes. Fat-shaming online does not only affect right-wing trolls. It is widespread and it is not limited to the right-wing trolls. Nancy Pelosi, House Speaker, publicly fat-shames Trump live on television. There are also countless internet users who have criticised measures to make obese people eligible for the COVID-19 vaccination, or give them free treats like Krispy Kreme donuts. It is a pernicious and common problem in right-wing communities online. Right-wing trolls have a long history of attacking overweight people online, and this latest attack on obesity is based on their fixation upon obesity.
cameriskfactorcovid19onlinemarjoriedeathsfalseclaimgreenesrightwingoverweightseveretaylorobeseobesity
2.2k Like