Olympic gymnasts tired of being objectified swap leotards for bodysuits 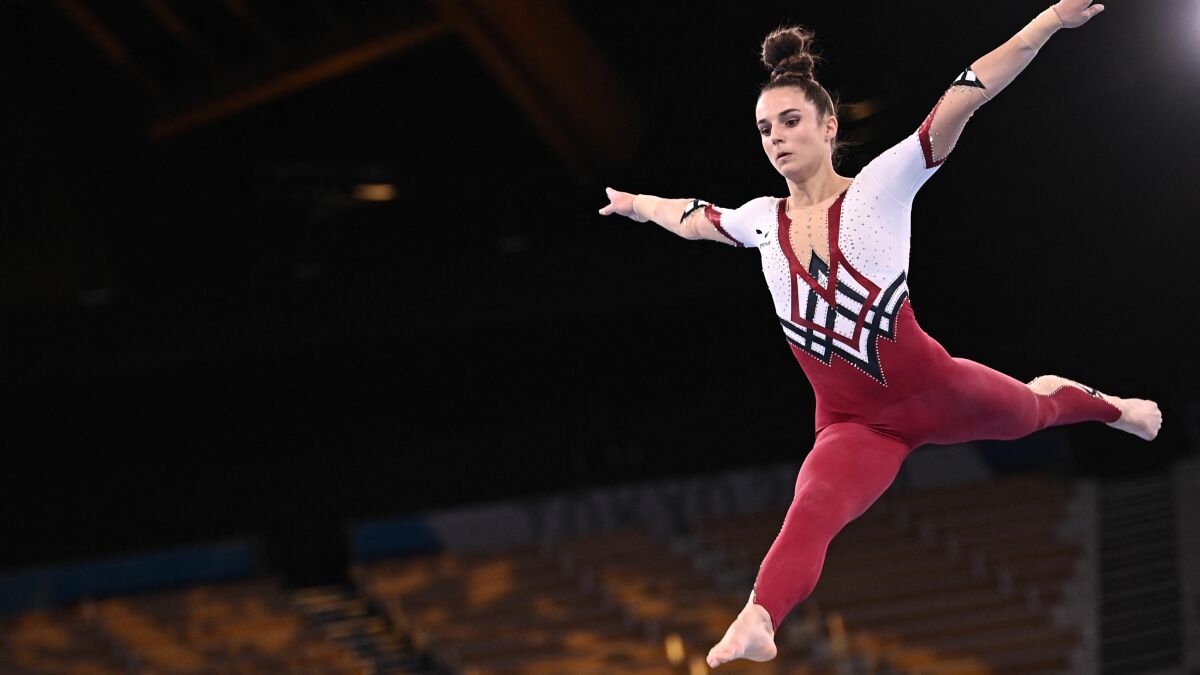 The German gymnastics team at the Olympics in Tokyo is drawing attention for more reasons than just its gravity-defying moves.To prevent sexualization of their bodies or the sport, and to feel more comfortable while competing, the gymnasts swapped standard bikini-cut leotards with full-body unitards Sunday during an Olympics qualifying round.According to Reuters, Elisabeth Seitz (27-year-old German Olympics gymnast) said that she wanted to demonstrate that everyone, every woman, should choose what to wear.German gymnast Elizabeth Seitz competes in Tokyo Olympics in a uniard. Credit: IRIS VAN DEN BROEK / Getty ImagesGerman gymnast Pauline Schaefer–Betz flips upside-down during the artistic gymnastics balance beam competition at the Tokyo Olympic Games. Credit: IONEL BONAVENTURE / Getty ImagesThis isn't the first time that the German team has worn full-body outfits that reach to their ankles, despite them breaking with tradition. The Washington Post reported that they wore the bodysuits at the European championships in April.According to Reuters, the move earned the team praise from many other female gymnasts.CNN reported that the International Gymnastics Federation allows competitive gymnasts to wear uniforms that completely or partially cover their arms and hide their legs. As long as they match their leotards. According to Reuters, gymnasts often cover their legs during competition for religious reasons.Simone Biles, the American gold medalist, stated that she supports athletes wearing their preferred uniforms, even though she will be sticking with the traditional leotard. According to the Associated Press, Biles stated that she supports their choice to wear whatever suits them and what makes them feel most comfortable. "Anyone out there who wants to wear a leotard or unitard is totally free to do so.Germany's Kim Bui displays her moves in a unitard during a qualifying round at the Tokyo Olympic Games. Credit: AFP via Getty ImagesThe athletes shouldn't be affected by the unitards.According to Reuters, Kim Bui, a 32 year-old German Olympics gymnast, said, "We also train with tights so that we feel the feeling." It is the same whether you are competing or training. It's comfortable, and that is what is most important."Although the German gymnasts were not in violation of any regulations with their bodysuits, it was the opposite for the Norwegian women's beach volleyball team who participated in a separate competition. According to the New York Times, each Norwegian female player was fined 150 euros ($177) by the European Handball Federation for wearing shorts instead of bikini bottoms while playing in a game.Female players must wear bikini bottoms that are tight fitting and at an upward angle towards the top of their legs.The fines were paid by the Norwegian Handball Federation and Pink."The European handball Federation should be punished for sexism." Pink tweeted on Saturday, "Good on you ladies!"The German gymnasts wanted to feel comfortable and look good at the Olympics.As a team, the team decided to wear the bodysuit prior to the meet.According to the Associated Press, Sarah Voss, a 21 year-old gymnast, said that they sat down together today and decided that we wanted to have a big competition. "We want everyone to see that we are amazing. We want to feel incredible."
handballfederationgermangymnastgymnastsgymnasticsleotardsolympicsunitardwearswapteamtiredbodysuitsolympicobjectified
2.2k Like