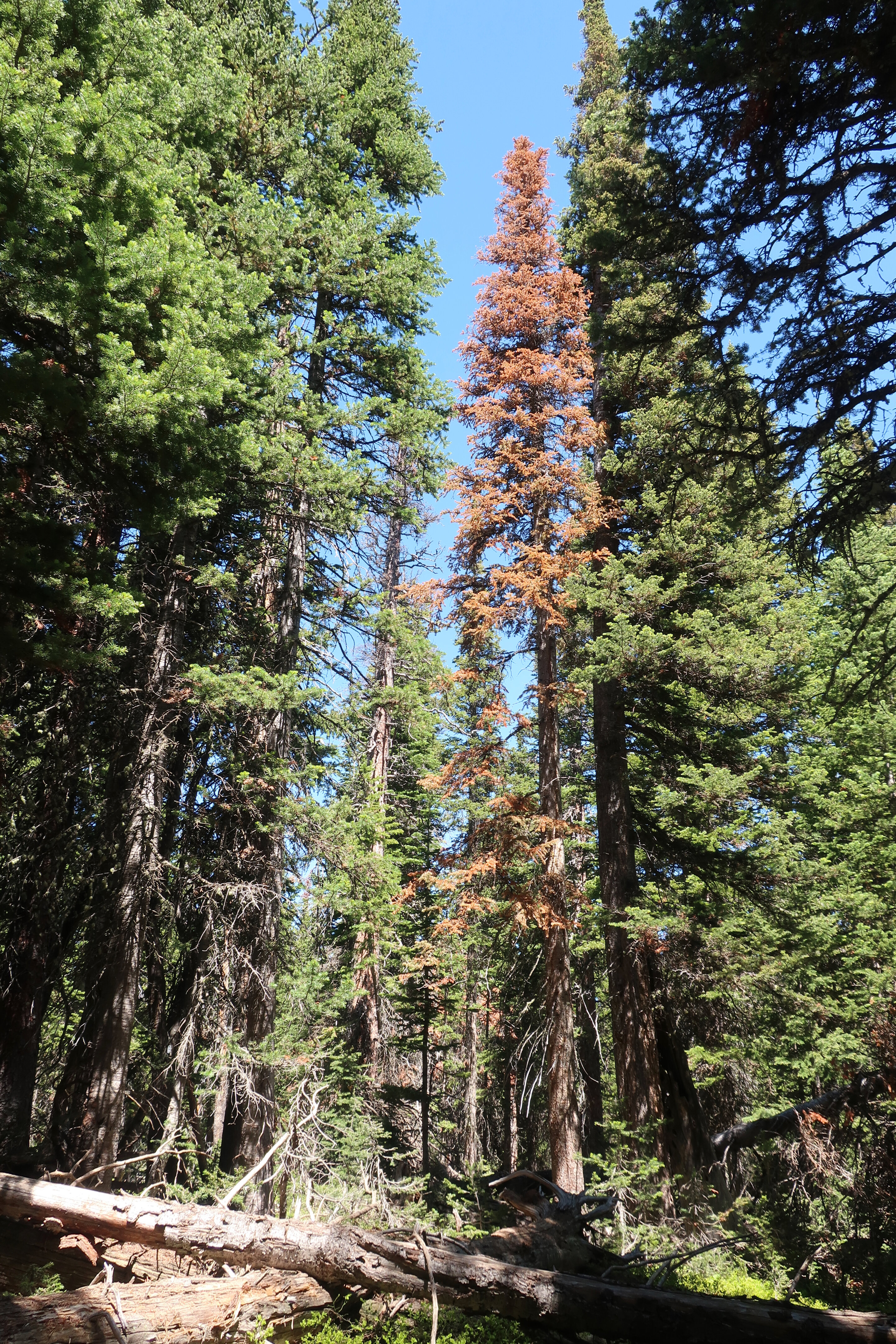 Dead trees in the subalpine Colorado forest, Niwot Ridge west of Boulder. Credit: Robert AndrusRecent research by the University of Colorado Boulder found that trees in Colorado's subalpine forests are suffering from increased mortality due to warmer and drier temperatures.This trend is also being observed in the study, which was published in the May print edition of the Journal of Ecology. The study found that tree mortality in Colorado subalpine forests has tripled in the past decade, despite not being affected by bark beetle or fire outbreaks.We have seen the obvious death of trees in Colorado due to wildfires and bark beetle infestations. We're showing that even in areas where people hike and the forest looks healthy, mortality rates are increasing because of heat and dry conditions," Robert Andrus, Washington State University postdoctoral researcher and lead author of the study. It's a warning sign that climate change is on the horizon.These deaths not only affect larger trees and reduce forests' carbon storage but also make it more difficult for new trees in the northern Rockies of Colorado, Wyoming, and New Mexico.Tree deaths are common in forests all over the world due to rising temperatures and increased drought. Researchers in Colorado found that drought and heat alone were responsible for more than 70% of tree deaths in 13 subalpine forests they studied over the past 37-years. This compares to 23% of tree deaths caused by bark beetles, and 5% to wind damage."It was surprising to see how strong is the relationship between climate and tree death, to see that there was a very evident effect of recent warmer, drier conditions upon our subalpine forest," stated Andrus, who was completing his graduate degree as physical geography at CU Boulder. "The alarming rate of rising mortality is alarming."Colorado's temperatures have risen by 2 degrees Fahrenheit in the past 20 years and are expected to rise further at higher elevations. Climate change is predicted to cause another 2.5 degrees of warming in the coming decades, which will lead to an increase in tree deaths.One of the more than 5,000 subalpine-fir trees that were tagged as part of this 37-year-long research in the Colorado subalpine forests on Niwot Ridge west of Boulder. Credit: Robert AndrusThe forest is the tree.Colorado's subalpine forests extend over 10,000 miles and are most well-known by those who enjoy skiing or recreation in the mountains. The area above the Peak-to-Peak Highway in Colorado is dominated by subalpine fir, Engelmann spruce, and you can cross any mountain pass in Colorado to enter the subalpine zone according to Andrus.Research done at CU Boulder previously showed how wildfire and beetle damage can impact the health and mortality of Rocky Mountain subalpine forest forests. The new research separated the effects of these two stressors from those of moisture and heat to determine how climate change is affecting tree populations.Tom Veblen, coauthor of the study, and professor emeritus in geography, stated that trees are dying more frequently due to drought, fire, bark beetles, and drought. It is becoming less likely that tree seedlings will grow and replace these dead trees.Veblen launched this long-running study on tree mortality in Colorado in 1982 when he first arrived on campus. Remeasurements are made often enough to identify the causes. Graduate students, postdoctoral research and undergraduate field assistants have returned to the over 5,000 trees marked on Niwot Ridge, just west of Boulder, three times a year since then. They found that trees die more often in summers with high maximum temperatures and lower moisture levels.The researchers found that tree mortality rose from.26% per annum in 1982 to 1993 to.82% per annum during 2008 to 2019, more than three times faster than it did during the previous 40 years.Andrus stated that it is difficult because it is not easily visible to casual observers. "But it is important to remember that, while warmer and dryer conditions can also lead to more bark beetle and fire outbreaks, these gradual and slow changes are still essential."Continue reading: Wildfire and combined bark beetle infestations spell doom for forests' futureRobert A. Andrus and colleagues, Increasing rates of mortality in subalpine trees due to warmer and drier winters, Journal of Ecology (2021). Journal Information: Journal of Ecology Robert A. Andrus et. al., Increasing rates of Subalpine Tree Mortality in Relation to Warmer and Drier Summers, (2021). DOI: 10.1111/1365-2745.13634
coloradomainforestsdeathbarkincreasingtreeheatsummersdriercoloradosextrememortalitywarmerdrytreessubalpine
2.2k Like