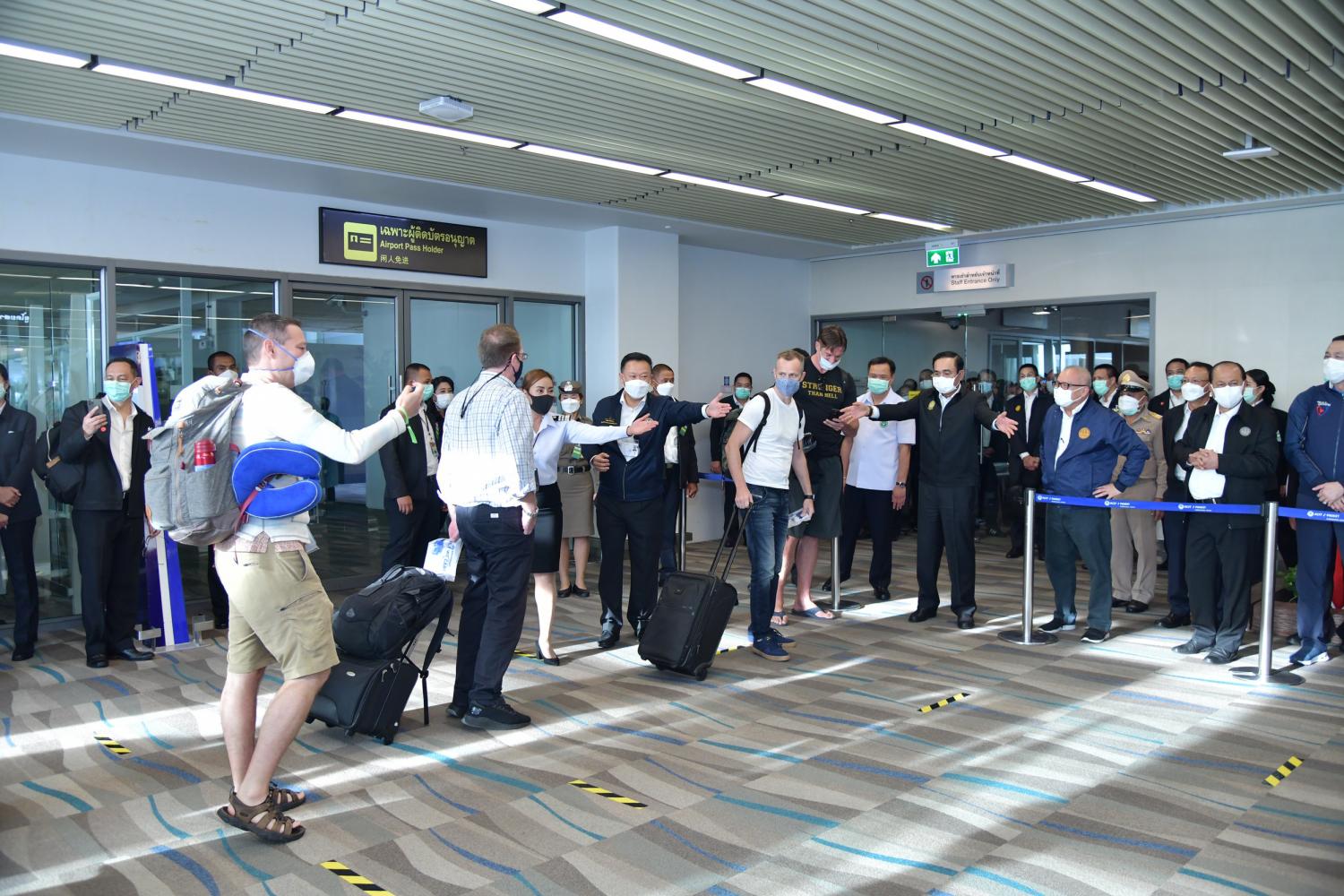 After the so-called Phuket Sandbox No Quarantine arrivals Scheme, which began on July 1, 2021, the Tourism Authority of Thailand (TAT), reported 1,324 arrivals to Phuket Island. The Prime Minister received the first arrivals at Phuket airport. (Image provided to the Government House). Daily arrivals average around 450, all of which are distributed among the SHA+-certified hotels on the island. These numbers are not surprising as many, if not all of the people who arrive in Phuket are not there to enjoy tourism. They chose to fly to Phuket in order to avoid the strict and costly Bangkok quarantine (ASQ). People have been in a mad rush to get their documents approved. They also fear that the system will be shut down at any moment. For more information about the Sandbox program, please refer to my previous article. Today's Bangkok Post report said that the Tourism Authority of Thailand, (TAT), is closely monitoring arrivals and has promised to publish the results. Over 1,300 foreign tourists have visited Phuket in the last three days as part of the quarantine-free Sandbox Scheme. Nanthasiri Raonnasiri is the director of the Tourism Authority of Thailand's Phuket Office. She said that 326 tourists visited the island on Thursday. 514 arrived on Friday. 484 arrived yesterday afternoon. This brings the total foreign visitors to the resort island to 1,324 since the beginning of the scheme. Ms Nanthasiri stated that her Phuket office will compile tourist figures daily which will be published. According to the government, about 100,000 tourists from abroad will visit Phuket during the third quarter of the year. This is to kickstart tourism after a slow period. Yesterday, Thai Airways International brought 122 more tourists to Phuket on three flights from Europe. Yesterday's flights from Paris, Copenhagen and Frankfurt carried 158 passengers. 122 of them disembarked in Phuket while the rest continued on to Bangkok. They were among the 484 passengers aboard seven flights that were due to land in Phuket yesterday afternoon. It is not known if the four other flights will have any tourists who plan to stay in Phuket. Authorities said that none of the tourists who arrived in Phuket over the past two days tested positive for Covid-19. Seven local infections were reported in Phuket yesterday, bringing the third-wave total to 746 cases and seven death. According to Friday's figures, 67% have been fully vaccinated, while 84% have received at least one dose. According to Friday's figures, 67% of the local population of around 400,000 have been fully vaccinated. 84% have had at least their first dose. It remains to be seen how steady these numbers are over the next weeks and months, and what the profile of travelers arriving at the airport will look like. Three General Managers from large chain hotels in Phuket spoke to me. They said that all the arrivals (as far they were able inquire and met the guests) arrived on the island in transit. After their minimum 14-day stay in Phuket, they will return to the mainland. This confirms the assumption that there won't be many tourists during the rainy season, but it really doesn't matter in this current situation. Slow start will enable authorities to stress-test the Sandbox model and make modifications if necessary. According to the Bangkok Post article, THAI has now started flying to Phuket as part of its policy to boost tourism and the economy. Five direct flights were already arranged from Europe to Phuket. Additional flights are scheduled on a semi-regular basis. Koh Samui, in addition to Phuket has announced that the Sandbox will be reopened in a similar fashion to the Sandbox's on July 15, 2021. This is the Samui Plus Model (SPM). According to the link under the SPM the foreign visitors must stay on Koh Samui for the first seven days after their arrival. Days 1-3 will be spent under quarantine, while days 4-7 will be traveled in sealed routes. They will be allowed to travel free from the 8th to 14th of each month. Three times will tourists be tested for Covid-19: on the first day of their arrival, either day 6 or 7, or day 12 or 13. I have not seen any TAT or government announcements that discuss the Samui model. Nor details about how to apply to a COE, or travel to Samui. I hope there is an update soon. The Covid-19 situation continues to deteriorate in Thailand, with approximately 6000 new infections per day and 70 people being admitted to ICU each day. I am still firm in my belief that it is not a good idea for tourists to Thailand right now, given the low recreational value of Thailand and the risks associated with the pandemic. Conclusion According to our sources, 1,324 people have registered to arrive in Phuket as part of the Sandbox program. Most are planning to travel to the mainland once their 14-day period is up. Last week, travelers can now apply for the Phuket Sandbox Certificate to Entry through the weblink at the local Embassy/ MFA. They will be able to fly to Phuket starting July 1st. This is an excellent option for people who live in Thailand and want to return home after receiving their vaccine abroad. It is unlikely that any tourism will take place in Thailand under this scheme given the current circumstances.
phuket days 1324 sandbox authority tourism flights reports thailand tourists samui yesterday arrivals tat
2.2k Like

Thailand ramps up organic tourism movement with reopening of Phuket