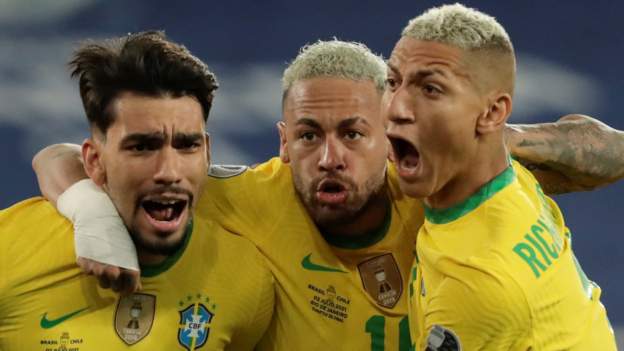 Last update on. From the section Football Brazil's striker Gabriel Jesus was sent off in the Copa America quarterfinal against Chile, but they held on to win 1-0 to advance to the semi-final against Peru. Brazil's Lucas Paqueta scored the first half goal, before Manchester City's Jesus was dismissed within two minutes of Brazil's victory. Chile kept up pressure, but Ben Brereton's header hit the bar. After a 3-3 draw, Peru won 4-3 on penalties and advanced. Brazil and Peru will meet again in the 2019 final. The former won 3-1. After the victory against Chile, Brazil's forward Neymar said that Jesus was "just bad luck." He was unable to keep his eyes on the ball and not the man. "Everyday that passes, we face tests to strengthen us and to show that we are capable of playing under any circumstances. "Chile is a great team. They have great players. It's very difficult to play with less. Everyone deserves to be praised - the defense, midfield and forwards. "We were able to endure something that is very rare for this team. It was a huge test for us." Peru won an exciting match against Paraguay. Captain Gustavo Gomez took the lead early on. Two goals by Gianluca Lepadula put Peru ahead, and Paraguay had Gomez expelled just before the half-time break, but they were able to equalize through Junior Alonso. Yoshimar Yotun had restored Peru's lead, but after Andre Carillo was sent to the stands in the 84th, Peru went down to 10 men. Gabriel Avalos then scored a last-minute equalizer to send the tie to penalties. Paraguay failed to score three spot-kicks, before Miguel Trauco scored for Peru the decisive penalty.
set beat team copa chile america paraguay overcome win man jesus brazil peru gomez semifinal lead sent scored Design Life Style Web Design Development Design Life Style
2.2k Like