First ever double hurricane could hit the Gulf of Mexico 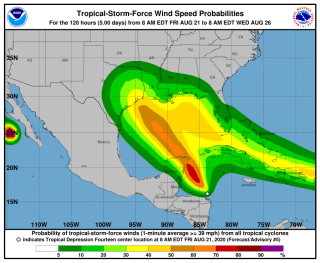 Next week for the first time on record, two hurricanes could hit the Gulf of Mexico at the same time.

Twice before, in 1959 and 1933, two tropical storms have entered the Gulf at the same time. But never before have both been hurricanes.

It might not go that way. Only one of the storm systems has yet strengthened into a tropical storm - a dangerous cyclone, but not yet a hurricane. The other remains a tropical depression, and its future is still unclear. But forecast models have suggested the possibility since at least Thursday (Aug. 20), and the storms are still following the path that would lead to double Gulf hurricanes.

Related: The 20 costliest, most destructive hurricanes to hit the US

The National Hurricane Center (NHC) has issued tropical storm warnings across much of the Caribbean for Tropical Storm Laura, which reached tropical storm strength today (Aug. 21), meaning it has wind speeds between 39-73 mph (63 and 118 km/h). It's currently east of Puerto Rico and early forecast tracks show it whirling over that U.S. territory, the U.S. Virgin Islands, Haiti, the Dominan Republic, Cuba, Florida, and then into the Gulf over the course of the weekend and early next week.

Tropical depression 14, expected to take the name Marco if it becomes a tropical storm, is moving more slowly. Forecast tracks show it heading north from its current location near Honduras, straight up the Gulf. The NHC has issued tropical storm warnings for parts of Honduras and southeastern Mexico, and a hurricane watch for much of eastern Mexico.

Early forecast maps of interacting winds from the two storms show them overlapping in the Gulf. And meteorologists have said it's still too early to predict exactly how the two storms will behave, particularly if they begin to interact strongly.

For what it's worth & it may not be much, next 5 days according to Euro Model. Takes #TD14/"Marco" on a more w'ward trek thereby permitting #Laura to follow suit more w'ward. Acadiana may begin to fall out of one cone & get deeper into another. Very low confidence forecast. #LAwx pic.twitter.com/0s69CDnCPC August 21, 2020

One possibility is a significant "Fujiwhara effect." According to the NHC, that's a term meteorologists use for when two tropical cyclones near each other and start to "dance around their common center."

It's unclear at this point how that would impact the movements of the storms in the Gulf, though The Washington Post that one possibility is a delayed arrival for Marco, giving it more time to strengthen over warm water.

The 2020 hurricane season has been extraordinarily busy, with Laura already a record setter today (Aug. 21) as the earliest "L" storm ever. (Tropical cyclones are named in alphabetical order as they achieve tropical storm strength.) This year also saw the earliest C, E, F, G, H, I, J and K storms, as Houston-based meteorologist Matt Lanza noted on . If tropical depression 14 becomes Marco, it will be the earliest M storm on record. (These records date back to the late 19th Century, and include storms from the era when tropical storms were numbered but not named.)

Originally published on Live Science. Join our Space Forums to keep talking space on the latest missions, night sky and more! And if you have a news tip, correction or comment, let us know at: community@space.com.

The National Oceanic and Atmospheric Administration says that as climate change warms the oceans, strong hurricanes are likely to become more frequent than they were in previous years.

For The First Time, Two Hurricanes May Hit The Gulf of Mexico at The Same Time

We're Only 3 Days Into Hurricane Season, And It's Already a Record-Breaker