Yesterday I posed the question of whether Delta would ban the man who killed Bin Laden back in 2011. Well, the answer is yes. Robert J. O'Neill has taken to Twitter to indicate that he "just got banned from Delta for posting a picture."

I just got banned from @Delta for posting a picture. Wow.

For those of you who missed the story yesterday, O'Neill posted a picture of himself on a Delta flight not wearing a mask, with the caption "I'm not a p*ssy." Because, you know, only "p*ssies" wear masks (and don't even get me started on the concept of using "p*ssy" as an insult - seriously?). 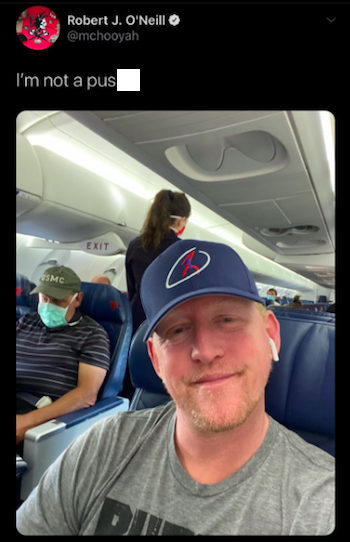 His Tweet was deleted many hours later. He then clarified that he didn't delete it, but rather that his wife did.

His Tweets since then haven't brought much clarity to the situation. One theory was that O'Neill was doing this as a joke since there was a guy with a USMC hat across from him. However, he confirmed it wasn't a dig at that guy.

Then he (sarcastically) claimed that joking is not allowed on Twitter, though I'm not sure why posting a picture not wearing a mask and claiming that makes you "not a p*ssy" is funny.

And then when Alyssa Milano schooled him, he said he does wear a mask...

... but then he separately also posted a link to a story saying that masks don't work.

Just a quick re-tweet... COMMENTARY: Masks-for-all for COVID-19 not based on sound data | CIDRAP https://t.co/HeWbJi3Di8

Then he reminded everyone that he's not a bad guy, but that he killed the bad guy...

Delta has so far added about 150 people to its "no fly list" over mask issues, so I appreciate the company's consistency with this, and not giving this guy a free pass.

Are you surprised to see that Delta banned this guy?
Prev Next