How schools can reopen safely during the pandemic

At schools across South Korea, children eat their lunches in silence, facing plastic screens that separate them from their friends. They wear masks, except when practising social distancing in the playground. And their temperatures are checked twice every morning - first at home and again at the school gates.

This could be the new reality for the millions of children around the world. Summer holidays are drawing to an end in the northern hemisphere, and in places such as the United States, the United Kingdom and some European countries that closed schools during the coronavirus pandemic, governments are debating when and how to open schools. A growing number of studies show that there are ways to do this safely. The key is vigilance on hygiene and physical distancing, a swift public-health response to halt the spread of any infections and, most crucially, low levels of viral spread in the community.

"Some countries in Asia, particularly South Korea, provide a good model for how schools can provide face-to-face teaching during the pandemic," says Zoë Hyde, an epidemiologist at the University of Western Australia in Perth.

But researchers say that if schools are opened before community transmission reaches low levels, cases will surge.

Schools can be high-risk places, says Young June Choe, a paediatrician and epidemiologist at Hallym University in Chuncheon, South Korea. Children are often crammed into poorly ventilated rooms for eight hours or more, he says. And there's a lot of mixing, because children come from across the neighbourhood, some on public transport, and often with their parents in tow.

Earlier in the pandemic, it appeared that children might interact differently with the virus than adults. Because children had milder symptoms, it was assumed they might be less infectious. But now there is evidence that children can spread the virus to other people, especially those living in the same household,. Several studies show that once children are infected, they are no less infectious. 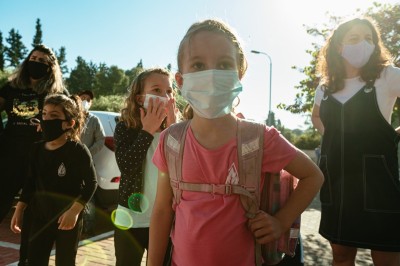 "If schools are reopened in areas with high levels of community transmission, major outbreaks are inevitable and deaths will occur in the community as a result," says Hyde. Evidence of this can be seen in the sporadic outbreaks and spill-overs that have already occurred, including those at a high school in Israel and a camp in the United States.

Studies in South Korea, Europe and Australia show that schools can open safely when community transmission is low. Children in South Korea returned to their classrooms in mid-May, when daily confirmed cases dropped to below 50 - equivalent to around one case per million people. Even with such low transmission rates, the government introduced measures to control viral spread, such as staged opening of schools, starting with high schools and then junior schools. At larger schools, or those in areas where cases were rising, only a portion of students attended. When someone tested positive, teaching went back online.

An analysis by researchers in Seoul that has not yet been peer reviewed found no sudden increase in cases of COVID-19 among children aged 19 and below in the 2 months after schools reopened. And government data report that only 1 of the 111 school-aged children who tested positive between May and July got the infection at school. Most were infected by family members, or at other locations. "The takeaway message is that with the right policies, we can control transmission in schools in a setting of low community transmission," says Choe. "There is no special recipe that makes Korea unique."

A survey by the European Centre for Disease Prevention and Control also found that schools reopening in several European countries beginning in mid-May has so far not been associated with a significant increase in community transmission.

The state of New South Wales (NSW) in Australia partially closed schools at the peak of the state's epidemic in March, but kept day-care centres open. Kristine Macartney, director of Australia's National Centre for Immunisation Research and Surveillance in Sydney, and her colleagues analysed data from schools and day-care centres from between late January and early April. Schools remained open for the children of health-care workers or those with no alternatives.

During the study period, the state averaged 193 cases a day - 24 per million people - but 58% of the cases were in travellers returning from overseas. Macartney and her co-workers found that only 25 of the 7,700 schools or day-care centres reported a primary infection during the study period. Of those cases, only four facilities had onward transmission.

Macartney points out that the results must be viewed in the context of the state's strong public-health response. NSW maintained high levels of testing in the population, rapidly identified cases and implemented contact tracing, and its borders were closed, with strict enforcement of quarantines. "If transmission would be occurring unchecked in the community, we are sure it would spill over into schools," says Macartney, noting that in a recent surge in cases in the neighbouring state of Victoria, hotspots have been identified at schools. "This virus will take advantage of any chink in the armour," she says.

In places where there is ongoingcommunity spread, schools and camps have become sites of major outbreaks. The virus swept through an overnight camp in the US state of Georgia in mid-June. On the first day of camp, Georgia reported 993 new cases of COVID-19. Campers slept in cabins in groups of up to 26, did not need to wear masks, and sang and cheered every day. A staggering three-quarters of the 344 tested participants were positive for SARS-CoV-2.

Another large outbreak was detected in a high school in Jerusalem, Israel, 10 days after all schools re-opened in mid-May. There were around 127 reported cases a day in the country in early May when some children began returning to school - equivalent to 15 cases per million people.

As temperatures exceeded 40°C, teenagers sat in air-conditioned rooms with more than 30 other classmates without masks. The outbreak affected 153 students and 25 staff members, as well as 87 siblings, parents and friends of those affected.

The school environment can also increase the risk of further community spread. In mid-March, a large school in Santiago, Chile, had a sizable outbreak just nine days after the country detected its first case of COVID-19. The school had more than 30 children in a class, and had been busy holding parent-teacher meetings. Researchers detected SARS-CoV-2 antibodies in 10% of students and 17% of staff when they were tested about two months later.

The school outbreaks in Israel and Chile suggest that large class sizes could play a part in transmission in schools, says Edward Goldstein, an infectious-disease epidemiologist at the Harvard T.H. Chan School of Public Health in Boston, Massachusetts.

Schools should implement measures for reasonable distancing, by splitting the day into morning and afternoon shifts to reduce the number of children in a classroom, for example, and by preventing parents and teachers from gathering at school entrances and exits, says Miguel O'Ryan, a paediatric infectious-disease researcher at the University of Chile in Santiago who led the Santiago school study.

If schools reopen in areas with a high rate of community transmission, being diligent about masking,class sizes, hand washing, and testing and tracing will be particularly important, says Katherine Auger, a paediatric researcher at Cincinnati Children's Hospital Medical Center in Ohio.

"If we go back to schools the way they used to be, then we are going to be in trouble," she says.

We Studied One Million Students. This Is What We Learned About Masking.

The Delta Variant in Schools: What to Know

COVID-19 cases rose among students as schools began to reopen in late July. Since then at least 1,000 schools have closed.