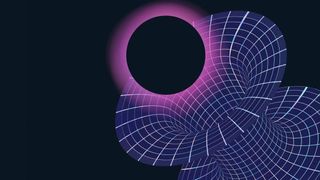 The quantum world is a pretty wild one, where the seemingly impossible happens all the time: Teensy objects separated by miles are tied to one another, and particles can even be in two places at once. But one of the most perplexing quantum superpowers is the movement of particles through seemingly impenetrable barriers.

Now, a team of physicists has devised a simple way to measure the duration of this bizarre phenomenon, called quantum tunneling. And they figured out how long the tunneling takes from start to finish - from the moment a particle enters the barrier, tunnels through and comes out the other side, they reported online July 22 in the journal .

Quantum tunneling is a phenomenon where an or a subatomic particle can appear on the opposite side of a barrier that should be impossible for the particle to penetrate. It's as if you were walking and encountered a 10-foot-tall (3 meters) wall extending as far as the eye can see. Without a ladder or Spider-man climbing skills, the wall would make it impossible for you to continue.

However, in the quantum world, it is rare, but possible, for an atom or electron to simply "appear" on the other side, as if a tunnel had been dug through the wall. "Quantum tunneling is one of the most puzzling of quantum phenomena," said study co-author Aephraim Steinberg, co-director of the Quantum Information Science Program at Canadian Institute for Advanced Research. "And it is fantastic that we're now able to actually study it in this way."

Quantum tunneling is not new to physicists. It forms the basis of many modern technologies such as electronic chips, called tunnel diodes, which allow for the movement of electricity through a circuit in one direction but not the other. Scanning tunneling microscopes (STM) also use tunneling to literally show individual atoms on the surface of a solid. Shortly after the first STM was invented, researchers at IBM reported using the device to spell out the letters IBM using 35 xenon atoms on a nickel substrate.

While the laws of quantum mechanics allow for quantum tunneling, researchers still don't know exactly what happens while a subatomic particle is undergoing the tunneling process. Indeed, some researchers thought that the particle appears instantaneously on the other side of the barrier as if it instantaneously teleported there, Sci-News.com reported.

Researchers had previously tried to measure the amount of time it takes for tunneling to occur, with varying results. One of the difficulties in earlier versions of this type of experiment is identifying the moment tunneling starts and stops. To simplify the methodology, the researchers used magnets to create a new kind of "clock" that would tick only while the particle was tunneling.

The researchers prepared approximately 8,000 rubidium atoms, cooled them to a billionth of a degree above absolute zero. The atoms needed to be this temperature, otherwise they would have moved around randomly at high speeds, rather than staying in a small clump. The scientists used a laser to create the magnetic barrier; they focused the laser so that the barrier was 1.3 micrometers (microns) thick, or the thickness of about 2,500 rubidium atoms. (So if you were a foot thick, front to back, this barrier would be the equivalent of about half a mile thick.) Using another laser, the scientists nudged the rubidium atoms toward the barrier, moving them about 0.15 inches per second (4 millimeters/s).

As expected, most of the rubidium atoms bounced off the barrier. However, due to quantum tunneling, about 3% of the atoms penetrated the barrier and appeared on the other side. Based on the precession of those atoms, it took them about 0.6 milliseconds to traverse the barrier.

Chad Orzel, an associate professor of physics at Union College in New York, who was not part of the study, applauded the experiment, "Their experiment is ingeniously constructed to make it difficult to interpret as anything other than what they say," said Orzel, author of "How to Teach Quantum Mechanics to Your Dog" (Scribner, 2010) It "is one of the best examples you'll see of a thought experiment made real," he added.

Experiments exploring quantum tunneling are difficult and further research is needed to understand the implications of this study. The Toronto group is already considering improvements to their apparatus to not only determine the duration of the tunneling process, but to also see if they can learn anything about velocity of the atoms at different points inside the barrier. "We're working on a new measurement where we make the barrier thicker and then determine the amount of precession at different depths," Steinberg said. "It will be very interesting to see if the atoms' speed is constant or not."

In many interpretations of quantum mechanics, it is impossible - even in principle - to determine a subatomic particle's trajectory. Such a measurement could lead to insights into the confusing world of quantum theory. The quantum world is very different from the world we're familiar with. Experiments like these will help make it a little less mysterious.