The specific timing of the move-following the secretary of state’s split from the president to condemn a Russian attack in the U.K.-raises questions about its motive.

The White House’s account of the Tillerson firing collapsed within minutes.

Senior administration officials told outlets including The Washington Post and CNN that Tillerson had been told he would be dismissed on Friday, March 9.

Within the hour, the State Department issued a statement insisting that Tillerson “had every intention of remaining” and “did not speak to the President this morning and is unaware of the reason.” CNN reported that Tillerson had received a call from White House Chief of Staff John Kelly on Friday night indicating that he would be replaced that did not specify timing; a senior White House official told the network that it was Trump himself who had suddenly decided to pull the trigger on Tuesday morning. Tillerson learned of his actual firing the same way everybody else did: By reading about it on Twitter shortly after 8:44 a.m. Eastern Time on Tuesday, March 13. 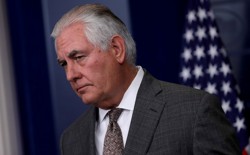 A lot turns on that timing. On March 12, Tillerson had backed the British government’s accusation that Russia was culpable for a nerve-agent attack on United Kingdom soil. If Tillerson had been fired March 9, then his words of support for Britain could not explain his firing three days before. But if the White House was lying about the timing, it could be lying about the motive.