From trade deals to gun control and immigration to military deployments, the president has a consistent pattern: Talk a big game, then back down.

President Trump’s May 8 announcement that he was withdrawing from the Iran nuclear deal should not have come as a surprise. He’d spent years railing against the plan-“the worst deal ever,” he dubbed it-and had promised to rip it up. And yet up to the moment when the president made the final call, there was still some suspense about what he would say.

This was not merely wishful thinking by the deal’s backers, though it was partly that. It was not only that members of Trump’s team, most notably Defense Secretary James Mattis, had voiced support for the deal. It wasn’t even just that Trump relishes taking the press (and even his own advisers) by surprise.

No, the other big reason that no one could be sure was that Trump almost always folds. Faced with a tough decision, the president has consistently blinked, giving in to his opponents. Trump has mocked former Secretary of State John Kerry for his supposedly poor negotiation powers, argued that multiple past international agreements suffered from weak-kneed diplomacy, and criticized British Prime Minister Theresa May, a close U.S. ally, for her conduct of the discussion on the U.K.’s departure from the European Union. 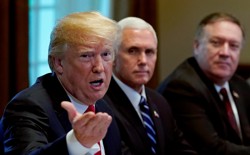 The president talks a good –or at least aggressive –game, but he doesn’t always walk it. The Iran deal is one of the few cases –which also include ditching the Paris climate agreement, leaving the Trans Pacific Partnership, and moving the U.S. embassy in Israel to Jerusalem –where Trump has stuck to the hard-nosed approach he promised during the campaign. But he twice flinched on Iran, too. In October 2017, his first chance to walk away from the deal, he made threatening noises but kicked the deal over to Congress and didn’t withdraw. He passed up another chance in January.

Foreign leaders were among the first to notice Trump was a pushover. In the first weeks of his presidency, they angled for face-to-face meetings with the new president, realizing that in personal meetings, especially when subjected to flattery, he could be swayed. The efforts paid off: Trump shared sensitive intelligence with the Russian foreign minister and ambassador. He backed down from threats to brand China a currency manipulator, and said that a 10-minute lesson from Xi Jinping on Chinese-Korean relations had convinced him Beijing had less sway over Kim Jong Un than he had believed. That same spring, Trump called the leaders of Mexico and Canada to announce he was going to pull out of NAFTA. The two men convinced Trump to agree to renegotiation instead, a significant climbdown.