The myriad Trump scandals can obscure the fact that they’re all elements of one massive tale of corruption.

In each of these cases, the president or one of his associates was seeking to profit, personally or financially, from their official duties and powers. When that conduct has potentially run afoul of the law, Trump has sought to bend federal law enforcement to his whim, the better to protect himself and his associates from legal accountability. The president’s ongoing chastising of his own Justice Department, and his war of words with current and former FBI officials, stem less from any coherent ideological principle than from Trump’s desperate need to protect himself. An authoritarian model of law enforcement, where the president personally decides who is prosecuted and who is not based on his own political agenda, is simply the best way for Trump to shield himself and his inner circle from legal consequences. 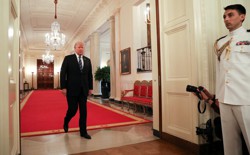 The president’s opponents have yet to craft a coherent narrative about the Trump administration’s corruption, even though the only major legislative accomplishment Trump has to his name is cutting his own taxes. But his supporters have, ironically, crafted an overarching explanation to account for how the president they voted for, who came to office promising to eliminate official corruption, has come to embody it. The “Deep State” narrative is no more complicated than an attempt to explain the accumulating evidence of misbehavior on the part of the administration as a wide-ranging conspiracy to frame the president. The more evidence of wrongdoing that comes to light, the more certain they are that the conspiracy theory is true. In their own way, Trump supporters have recognized that Trump’s burgeoning list of scandals is made of branches from the same twisted tree.

The latest Trumptown fable, that the FBI inquiry into the Trump campaign was meant to aid Clinton’s campaign, is as incoherent as it is absurd. The FBI properly kept the Russia inquiry under wraps while high-ranking FBI officials defied Justice Department rules and made public statements about two inquiries into Clinton prior to election day. Neither of those inquiries led to indictments or guilty pleas; the special-counsel inquiry has led to more than 20 so far. Had the FBI been motivated by a political vendetta against Trump, leaking the fact of the inquiry on its own, even if it uncovered no malfeasance at all, would have been enough to damage his candidacy. The essential quality of pro-Trump punditry however, is that their perception of reality must be warped to conform to the latest Trump proclamation, even if it contradicts previous Trump pronouncements or established facts. Trump dictates reality, and his supporters rush to justify whatever has been decreed. In this way, Trump manages to corrupt not just those in his immediate orbit or inner circle, but even those who have never met him, who endeavor to reconcile the insurmountable gap between his words and the world as it exists.