Its text and context don’t ensure an unlimited individual right to bear any kind and number of weapons by anyone.

It’s not clear to me that that’s a rule. Statutory interpretation is a useful constitutional tool, but constitutions aren’t statutes, and a one-sentence amendment isn’t a statute with a separate “preamble.” The “militia” clause is an ” absolute phrase”; in grammatical germs, it modifies the entire sentence to which it is attached. I am not sure that I think “modification” can never contain “limitation.” It seems to me-as even Scalia wrote-that the words mean “Because a well-regulated militia is necessary etc., the right of the people etc. shall not be infringed”-and that the second part of the sentence doesn’t float very far away from the first.

So let’s agree that the language of the amendment points our attention pretty strongly in the direction of the militia. But that doesn’t resolve the matter; and again, if we were buying a used car, we would read the whole document-that is, in this case, what Justice Neil Gorsuch calls “the arcane matter of the Constitution.” 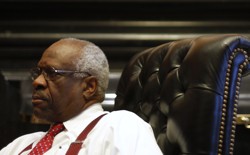 What Clarence Thomas Gets Wrong About the Second Amendment

That reading makes sense in a larger context-that of the constitutional situation at the time of the Philadelphia Convention. Of all the changes the new Constitution made in the relations of state and nation, the new central government’s arrogation of power over the militia was the most radical single feature of the new system.