Political marches are typically meant to make noise: voices raised, anger articulated, struggles for justice made loud and unavoidable. The March for Our Lives, held on Saturday in Washington, D.C., and in satellite events across the United States, followed, in that sense, activist tradition: It included speeches, rousing and passionate. Its participants carried signs, their messages clever and biting. Yolanda Renee King, the 9-year-old granddaughter of Martin Luther King, Jr. and Coretta Scott King, made a surprise appearance on the march’s main stage: a symbolic passing of the torch of political activism to the next generation of American leaders. “Spread the word,” King said, inviting the crowd to speak along with her, “have you heard? / all across the nation / we are going to be / a great generation.” 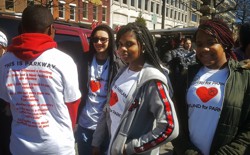 The Students Who Weren’t Just Marching for Parkland

People have heard that-at least, they are starting to hear it. And they are hearing it in part because the rising generation in question-Generation Z, a cohort of Americans who came of age in the era of cable news and social media and an omnipresent internet-is extremely savvy about the workings of the American media. The March for Our Lives was, in the best ways, a testament to that. It offered, in its official programming, a series of set pieces: moments serving not only as political activism, but also as tailor-made soundbites for CNN, as snippets of video perfect for sharing online. Moments that, through the alchemy of the internet, become transformed into sharable speech. Moments that, in a sentiment repeated by many of the marchers on Saturday, help to make a movement.

What the March for Our Lives presented at the same time, however, was … the opposite of all that. The event served up, as part of its speech, silence-simple silence. Striking silence. Solemn silence. Participants in the march took the convened attention of an international audience and used it not only to advocate for gun control, but also to advocate, more broadly, for people who had been deprived of speech. And to offer a solemn reminder that, for some things-even in this most classic of First Amendment contexts-words will never, can never, be enough.