“It has been our practice to not disclose testimony, but to reveal when witnesses refuse to answer questions,” Schiff said. “We don’t allow witnesses to say publicly that they’re cooperating, when they have actually refused to answer our questions.” 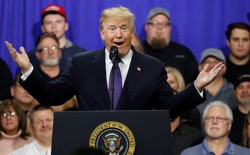 He Dares Call It Treason

In an interview last December, Trump Jr. declined to answer the committee’s questions about a phone conversation he had had with his father in July 2017 about the June 2016 Trump Tower meeting. An attorney had been present on that call, too, Trump Jr. said, so he was shielded by attorney-client privilege.

Democrats were incredulous-that’s not how attorney-client privilege works, they argued.

“So we called him out on that,” Schiff said. “And obviously that was threatening to the White House. They’ve been attacking me ever since.”

There was another, more immediate trigger for Trump’s early-morning tweet, Schiff said: the House Intelligence Committee’s impending vote on whether to release the Democrats’ 10-page response to chairman Devin Nunes’s accusations of surveillance abuses carried out by the Justice Department.

The committee voted to release the rebuttal on Monday and sent it to the White House to review and ultimately declassify.

“The president is unhappy about being in the position of having to declassify our rebuttal to the Nunes memo, which he thinks is vindication for him, because it will reveal how flawed the Nunes memo is,” Schiff told me. A spokesperson for Nunes did not immediately reply to requests for comment.