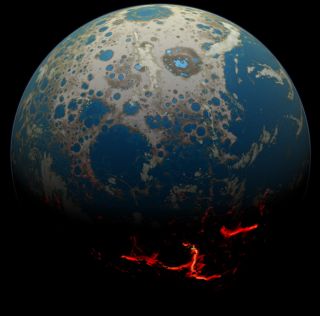 NASA may discover the secrets of the sun’s early history in an unlikely location: Earth’s moon.

A new study based in part on simulations could help scientists better understand how habitable Earth’s solar system was some 4 billion years ago. Because researchers are scouring the universe with telescopes in the hunt for habitable worlds, they’d like to better understand how life developed here on Earth, our one example of a life-supporting world to date. Factors such as how far a rocky planet is from its sun and whether that world can host liquid water are key. But scientists also suspect that radiation is important, and we still know little about that factor.

“We didn’t know what the sun looked like in its first billion years, and it’s super important because it likely changed how Venus’ atmosphere evolved and how quickly it lost water,” study lead author Prabal Saxena, an astrophysicist at NASA’s Goddard Space Flight Center in Maryland, said in a statement. “It also probably changed how quickly Mars lost its atmosphere, and it changed the atmospheric chemistry of Earth.”

Related: What Moon Craters Can Tell Us About Earth and Our Solar System

One key problem comes in understanding how fast the young sun rotated, because the faster it spun, the more it would have spat into the solar system, potentially destroying planetary atmospheres. But scientists weren’t around back then, so they want to find some kind of record in the solar system. Luckily, the moon’s surface might provide the answer.

That surface ultimately dates back to about 4.5 billion years ago, the thinking goes, when a Mars-size world crashed into Earth. Bits from the collision ended up in orbit around the planet, gradually colliding with each other and forming the moon.

But one big hole in that theory remains: why the lunar regolith contains less sodium and potassium than Earth’s soil does. Surely if the two bodies had similar histories, they should have similar compositions now.

That’s where the new research comes in. It combines this long-standing elemental mystery with computer simulations of star rotation, based in part on observations from the Kepler space telescope. The combination suggests that the sun was a slow rotator, spinning more slowly than 50% of young stars.

Only simulations with a slow-rotating star (as opposed to medium- or fast-rotating stars) showed charged particles from the sun crashing into the moon’s surface, knocking enough potassium and sodium to create the element gap we see today.

And that slow rotation could have implications here on Earth, too. If the young sun had rotated quickly, it would have sent out “super flares,” or flares 10 times stronger than any observed in recorded history, at least 10 times a day. This barrage would have reduced Earth’s air pressure and forced water out of the atmosphere.

In addition, Earth would have generated a magnetic field back then just as it does now, which deflected some charged particles. This allowed our early, volcanic-rich atmosphere of carbon dioxide, water and nitrogen to evolve into the life-friendly oxygen and nitrogen around today.

From the perspective of life, Earth was lucky compared to other rocky planets in the solar system. Both its neighbors, with much weaker magnetic fields, had less protection against even the quieter sun. Mars lost its atmosphere to solar activity, then lost its running water as well, although some water is locked away at the Martian poles and underground.

The connection between slow rotation in our young star and the habitability of early Earth is still a hypothesis, but sending astronauts back to the moon could change that. NASA currently plans to land humans at the lunar south pole, and that’s precisely where scientists believe the moon’s magnetic field would have deflected solar particles during this early period, depositing them on the surface. Collecting samples from that region to study in Earth’s labs could give scientists the data they need to test their hypothesis.

“The reason the moon ends up being a really useful calibrator and window into the past is that it has no annoying atmosphere and no plate tectonics resurfacing the crust,” Saxena said. “So as a result, you can say, ‘Hey, if solar particles or anything else hit it, the moon’s soil should show evidence of that.'”

A paper based on the research was published May 3 in The Astrophysical Journal Letters.