John Dowd is the president’s second personal lawyer to leave the job and it’s the second major change to his legal team this week.

John Dowd announced he will depart his position as President Trump’s lead personal lawyer in the Russia investigation, the second person to leave that job in less than a year. 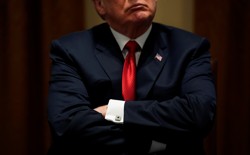 Dowd announced his exit late Thursday morning. The specifics of the decision remain obscure- The Washington Post described it, somewhat paradoxically, as ” a largely mutual decision”-but the departure comes amid rising frustration from the president with his legal team and frustration from the legal team over Trump’s refusal to follow advice. Dowd had been a particularly strong voice arguing against Trump testifying to special counsel Robert Mueller, and over the weekend Dowd called for Mueller’s firing, initially telling The Daily Beast he spoke for the president, then later insisting he spoke only for himself.

In a statement emailed to the Post, Dowd said, “I love the president and wish him well.”

The events that culminated in Dowd’s exit on Thursday show why the president is so difficult for any lawyer to defend, and why replacing Dowd will be a tall order for Trump. Last week, Trump tweeted:

The Failing New York Times purposely wrote a false story stating that I am unhappy with my legal team on the Russia case and am going to add another lawyer to help out. Wrong. I am VERY happy with my lawyers, John Dowd, Ty Cobb and Jay Sekulow. They are doing a great job and…..

On Monday, however, Trump confirmed the Times reporting when he hired a new attorney, Joe DiGenova, an accomplished lawyer who has, however, recently peddled conspiracy theories about the Mueller probe.