Meanwhile, a few things did correlate with support for Trump: a voter’s desire for their group to be dominant, as well as how much they disagreed with Clinton’s views on trade and China. Trump supporters were also more likely than Clinton voters to feel that “the American way of life is threatened,” and that high-status groups, like men, Christians, and whites, are discriminated against. 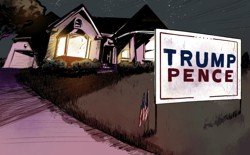 This sense of unfounded persecution is far from rare, and it seems to be heightened during moments of societal change. As my colleague Emma Green has written, white evangelicals see more discrimination against Christians than Muslims in the United States, and 79 percent of white working-class voters who had anxieties about the “American way of life” chose Trump over Clinton. As I pointed out in the fall of 2016, several surveys showed many men supported Trump because they felt their status in society was threatened, and that Trump would restore it. Even the education gap in support for Trump disappears, according to one analysis, if you account for the fact that non-college-educated whites are simply more likely to affirm racist views than those with college degrees. (At the most extreme end, white supremacists also use victimhood to further their cause.)

These why-did-people-vote-for-Trump studies are clarifying, but also a little bit unsatisfying, from the point of view of a politician. They dispel the fiction-to use another 2016 meme-that the majority of Trump supporters are disenfranchised victims of capitalism’s cruelties. At the same time, deep-seated psychological resentment is harder for policy makers to address than an overly meager disability check. You can teach out-of-work coal miners to code, but you may not be able to convince them to embrace changing racial and gender norms. You can offer universal basic incomes, but that won’t ameliorate resentment of demographic changes.

In other words, it’s now pretty clear that many Trump supporters feel threatened, frustrated, and marginalized-not on an economic, but on an existential level. Now what?