While the big bats and long balls are garnering most of the headlines, we’re seeing some special — and surprising — performances on the mound as well. We look at some of them and the other big storylines that will play out this weekend.

White Sox starter Lucas Giolito was 7-0 with a 0.88 ERA and .385 OPS allowed in his past seven starts going into a tough test facing the Yankees on Friday night, but won his eighth straight decision with a one-run, six-inning effort. Where does Giolito fit in your early look at the AL Cy Young contenders?

Eddie Matz: Given his massive dimensions, it’s hard to fit Lucas Giolito into anything. But when I saw him last week in D.C. (when he told me he was bummed to not be facing his former team, the Nationals), he looked significantly leaner than in the past. Still towering, but leaner. As such, I suppose I can fit him into my early American League Cy Young ballot … right near the top. If not for a couple of missed starts in April (hammy), he’d probably be at the top. As it is, he’s still neck-and-neck (and neck) with Charlie Morton and Jake Odorizzi.

Diamondbacks at Nationals, Friday, 7 p.m. ET — If you like strikeouts, you’ll love this matchup. The Nats’ Max Scherzer (12.28) and Arizona’s Robbie Ray (11.91) are 1-2 among NL starters in K/9 IP.
Phillies at Braves, Friday, 7:20 p.m. ET — The Phillies come to Atlanta looking up to the Braves, who enter the weekend with a seven-game winning streak and 1½-game lead in the NL East.
Yankees at White Sox, Friday, 8:10 p.m. ET — Lucas Giolito, one of baseball’s hottest pitchers, tries to tame the Bronx Bombers.
Angels at Rays, Saturday, 1 p.m. ET (ESPN+) — Charlie Morton tries to improve to 9-0, but has to go through Mike Trout to get there.
Red Sox at Orioles, Saturday, 4 p.m. ET — Behind Chris Sale, the Sox look to build some positive momentum at Camden Yards, a favorite park of Mookie Betts (14 HRs in 42 games).
Cubs at Dodgers, Sunday, 7 p.m. ET (ESPN) — The finale of a potential playoff preview features the otherworldly Hyun-Jin Ryu (0.53 ERA over his past seven starts)

David Schoenfield: Just as expected, it’s Verlander battling Giolito, Odorizzi and Morton for Cy Young honors. Verlander has 21 more innings than Morton (the No. 2 guy), 25 more than Giolito and 30 more than Odorizzi. On the other hand, he’s allowed more home runs than the other three combined. Verlander has allowed 17 home runs — but somehow only 28 runs, which is weird and crazy. I think the innings matter, and Verlander has 13 quality starts in 15 outings, five more than Morton’s eight. I go Verlander-Morton-Giolito-Odorizzi at the moment.

Speaking of Cy Young contenders, Hyun-Jin Ryu enters his Sunday Night Baseball start against the Cubs (7 p.m. ET, ESPN) sporting a 9-1 record and a 1.36 ERA. What is the most impressive aspect of Ryu’s most impressive season thus far?

Matz: I’ll take “Ridiculous Strikeout-to-Walk Ratios” for $400 please, Alex. In 13 starts, the Los Angeles Dodgers lefty has 77 punchouts with just five free passes. Five! Cinco! Chamesh! That works out to a K-BB ratio of 15.4 that is the best in the majors by a landslide meets a mudslide meets a slide guitar meets an electric guitar meets an electric eel. Speaking of electric eels, here’s how shocking Ryu’s ratio is: The next-closest guy is Max Scherzer, whose ratio of 6.6 isn’t even half of Ryu’s. If Ryu keeps this up, he’ll shatter the single-season record of 11.6, currently held by Phil Hughes. Where I come from, we call that impressive.

Miller: What do Yu Darvish, Luis Castillo, Robbie Ray, Julio Teheran and Trevor Bauer have in common? They all have higher walk rates this year, against all batters, than Ryu has in three-ball counts. (So do a bunch of other starters, by the way.) And with runners in scoring position, Ryu is allowing a .037/.054/.037 line. So when things have gotten a little rough — runners on, or a bad count — he has made the pitch he needed to make.

The Rangers — who are in Cincinnati this weekend (1 p.m. ET Sunday, ESPN+) — are one of the most pleasant surprises of the season. Will they be able to stay in wild-card contention through September?

Matz: Can they stay in wild-card contention? Sure, along with half the league. Will they win the wild card? Only if they continue to play 56% of their games against the Mariners, Orioles and Royals, as they’ve done over the past month (they’re 12-3 against that hole-y troika during that stretch). For what it’s worth, Texas faces Seattimore City just 13 times over its final 94 games. They don’t call ’em the dog days for nothin’.

Miller: The Rangers took an extremely risky strategy into this season, betting on recent Tommy John-ers Shelby Miller, Drew Smyly and Edinson Volquez in their rotation. It worked out even better than they planned: Those three have thrown 91 innings, allowed 91 runs and somehow caused the rest of the team to wildly outperform all expectations. The Rangers have, in the past few weeks, remade that broken rotation on the fly, and it’s sort of working. I could see them winning 84 games, for sure. But the three teams they’re holding off in the wild-card race — Cleveland, Oakland and Boston, all just a couple of games back — won 91, 97 and 108 games last season, respectively, and I can’t really see all three of them collapsing to 83 or worse this year.

Schoenfield: What they said! Look, with four American League teams on pace for 100 losses and the Mariners trending in that direction, the season is set up for a surprise team. Somebody has to win some of these games. Aside from Texas’ rotation concerns, I’m not sure this is a playoff-caliber offense, and that’s even without assuming regression from Joey Gallo and Hunter Pence. The Rangers are second in the AL in runs (through Wednesday), but fourth in batting average, sixth in OBP and fourth in slugging. They’ve hit .281/.365/.508 with runners in scoring position, so they’ve hit well in the clutch. They need that to continue, but you don’t want to have to bet on that to continue.

Writers’ choice: What are you most looking forward to this weekend?

Matz: Baltimore lefty John Means has been good enough that the O’s — yes, those O’s — actually have two guys who deserve to be in the All-Star conversation ( Trey Mancini being the more obvious one). A 26-year-old rookie, Means didn’t crack the rotation until mid-April, so he’s a teensy bit shy of qualifying for the ERA title. But if he did qualify, his 2.60 ERA would rank sixth in the AL. This weekend, he and his pet changeup draw the Red Sox again. He’s already faced Boston twice and pitched well both times. I’ll be looking to see if he can fool the Sox thrice and keep the Means mojo going.

ESPN’s Buster Olney leads the discussion of the latest news and notes around baseball with the game’s top analysts. Listen

Miller: Byron Buxton has climbed to sixth in the American League in WAR, and certainly in the top three for sharable defensive highlights. The Twins are hosting the Royals this weekend, looking to pad their 95% chance of winning the AL Central, and I’ll be looking for Buxton to punish a terrible Royals pitching staff and play himself into the MVP conversation. There are few things I’d enjoy more than Buxton, with so much beauty in his game, putting everything together and finishing second to Mike Trout.

Schoenfield: Well, Cubs-Dodgers should be fun, including that Ryu game Sunday. But the matchup I want to check out is Kyle Hendricks versus Rich Hill on Friday, a meeting of two of my favorite pitchers in the game. In this era of power pitchers followed by power relievers, I love watching these two finesse guys outwit batters. Hendricks is unique as a finesse right-hander, Hill with that big looping curveball. They remind us that you don’t have to throw 95 mph to succeed.

The top two teams in the NL East meet with the Phillies facing the Braves in Atlanta. Who will win the series?

One year after he put on a Braves jersey for the first time, Atlanta’s talented outfielder is already placing his name among lofty company. Jeff Passan

Schoenfield: The Phillies swept the Braves in Philly to begin the season (their only meeting so far), when two of the Atlanta starters were Bryse Wilson and Kyle Wright. This time it’s Sean Newcomb, Max Fried and Mike Foltynewicz. I’ll go with the Braves taking two of three at home, with Newcomb having a nice return to the rotation after his excellent relief outing the other night (4.2 IP, 1 H, 0 BB, 6 SO).

As we all know, home runs are flying everywhere. Choosing from three of the top homer-hitting teams of June, which team will hit the most long balls this weekend: Mariners, Braves or Twins?

Matz: Seattle plays at Oakland, where dingers go to die. Minnesota plays at home, where Twins taters don’t happen nearly as much as they do on the road. That leaves the Braves, who will leave the yard early and often this weekend. Eight times, to be exact.

Miller: I’m not ashamed to admit: I did not expect that question to end with those three teams. The Braves get to face the Phillies, who have been the National League’s most homer-prone pitching staff. And unlike the Mariners, they’re at home. I’ll take them.

Schoenfield: The Twins laugh at Eddie’s prediction of eight home runs for a weekend. They’ve hit eight in a game twice already. They do face Brad Keller on Friday, and he’s been stingy with the big flies (four in 86 IP), but since I’m picking the Twins to win every game the rest of the season, I’ll go with them.

Anyone willing to boldly pick the Cubs to beat Ryu and the Dodgers on Sunday night?

Matz: Um, no. But I am willing to boldly pick my nose. Inside the privacy of my own car. When nobody’s looking. And I’m on the highway, where I can roll down the window and use the wind as a disintegration agent.

Miller: I’d like to be the brave one — the Dodgers have slugged 50 points lower against lefties than righties this year, and the Cubs will start Jose Quintana, soooooo maybe? — but the actual better team is at home and starting a pitcher with a 1.66 ERA since the start of 2018. I’m not that brave.

Schoenfield: Ryu has allowed two runs or fewer in all 13 starts. Only one starter (not including Rays opener Ryne Stanek last season) has begun a season with more consecutive starts of two runs or fewer (at least since 1908). It was not Nolan Ryan. It was a guy named Al Benton for the 1945 Tigers, who had 15 in a row. Not bad for a guy who served in the military the previous two seasons. I think it’s time for Benton’s mark to fall. Ryu does it again with seven scoreless innings to go to 14 in a row.

Each week, we ask our panelists to choose one hitter they think will hit the most home runs and one pitcher they think will record the most strikeouts in the coming weekend. Panelists can pick a player only once for the season. We’ll keep a running tally — and invite you to play along at home.

Schoenfield: Wow, I see I’m getting crushed in this race. Plus, I’ve used my Bellinger and Yelich cards and neither homered. Let’s go Ronald Acuna Jr. 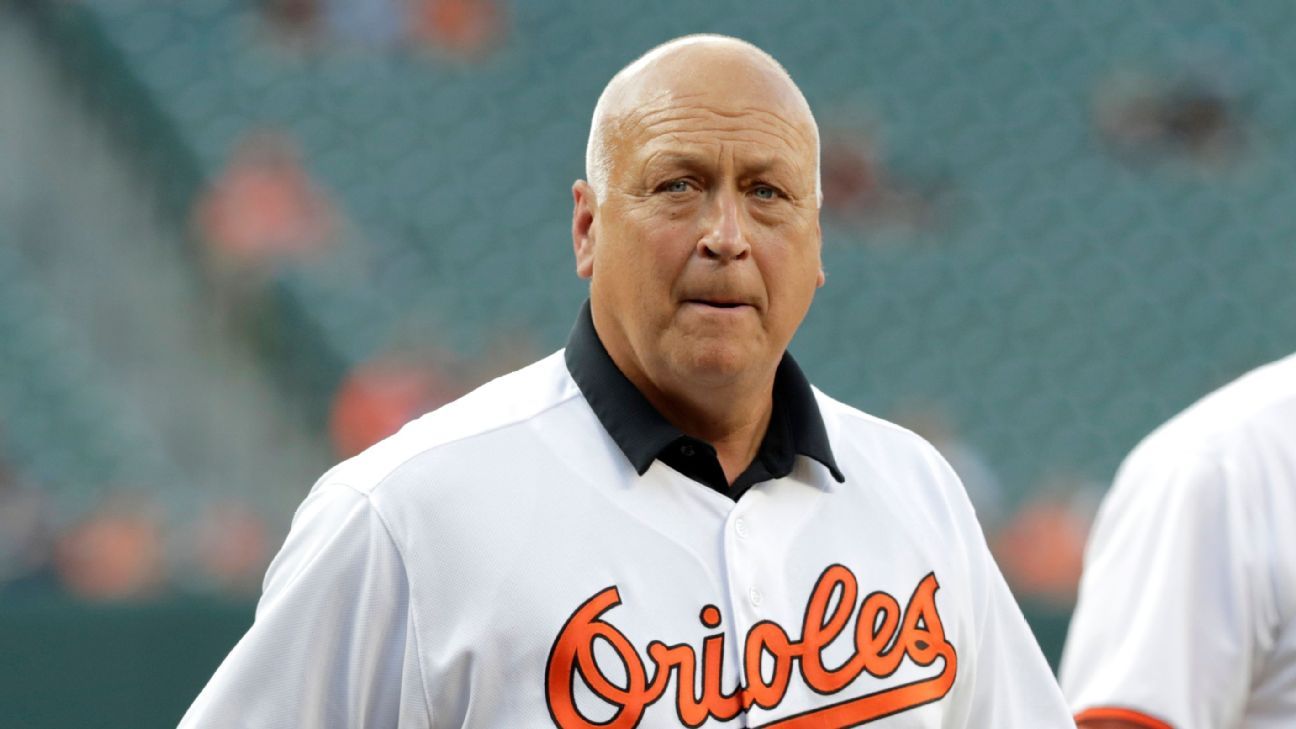 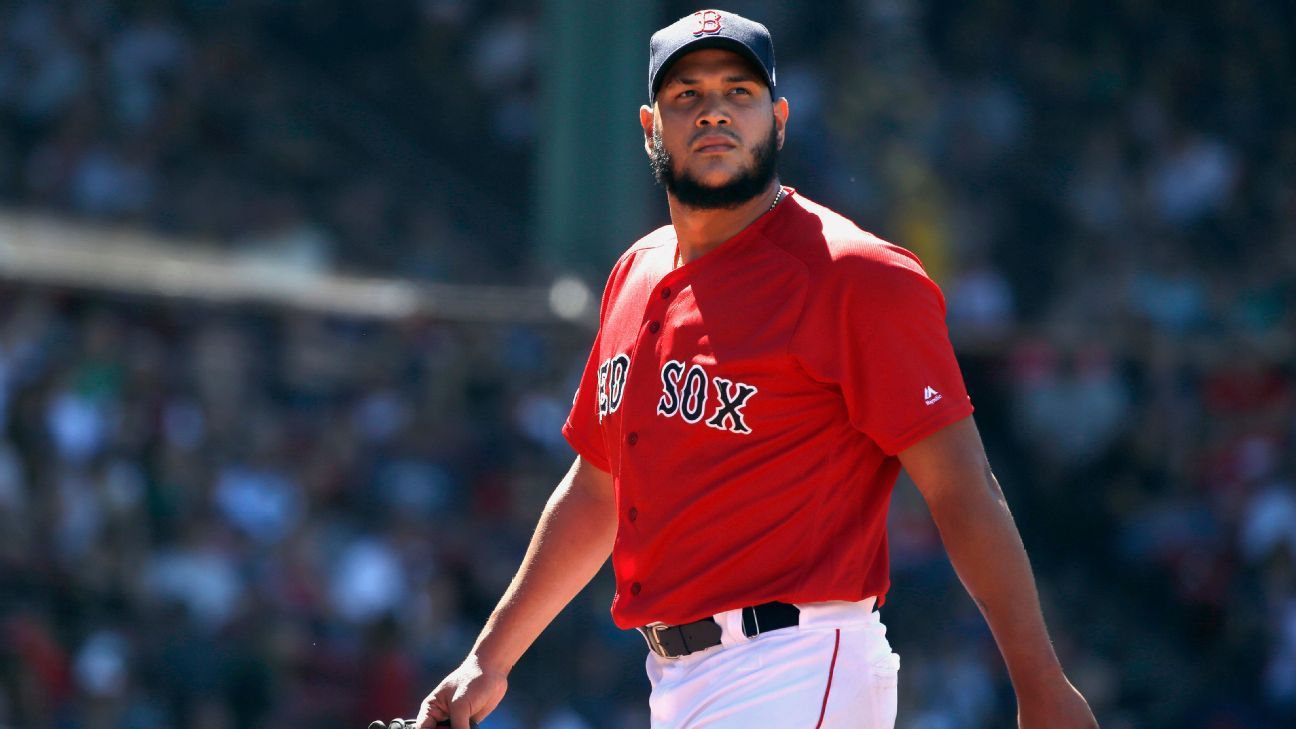 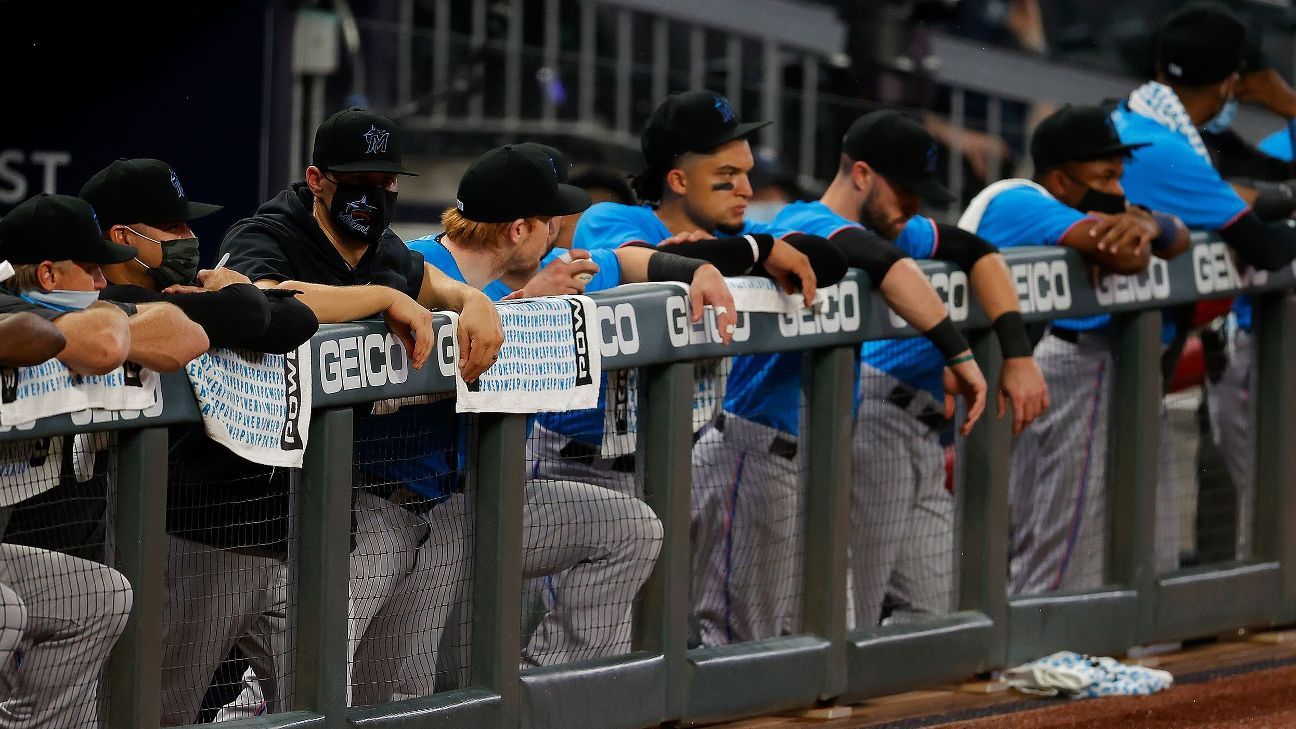 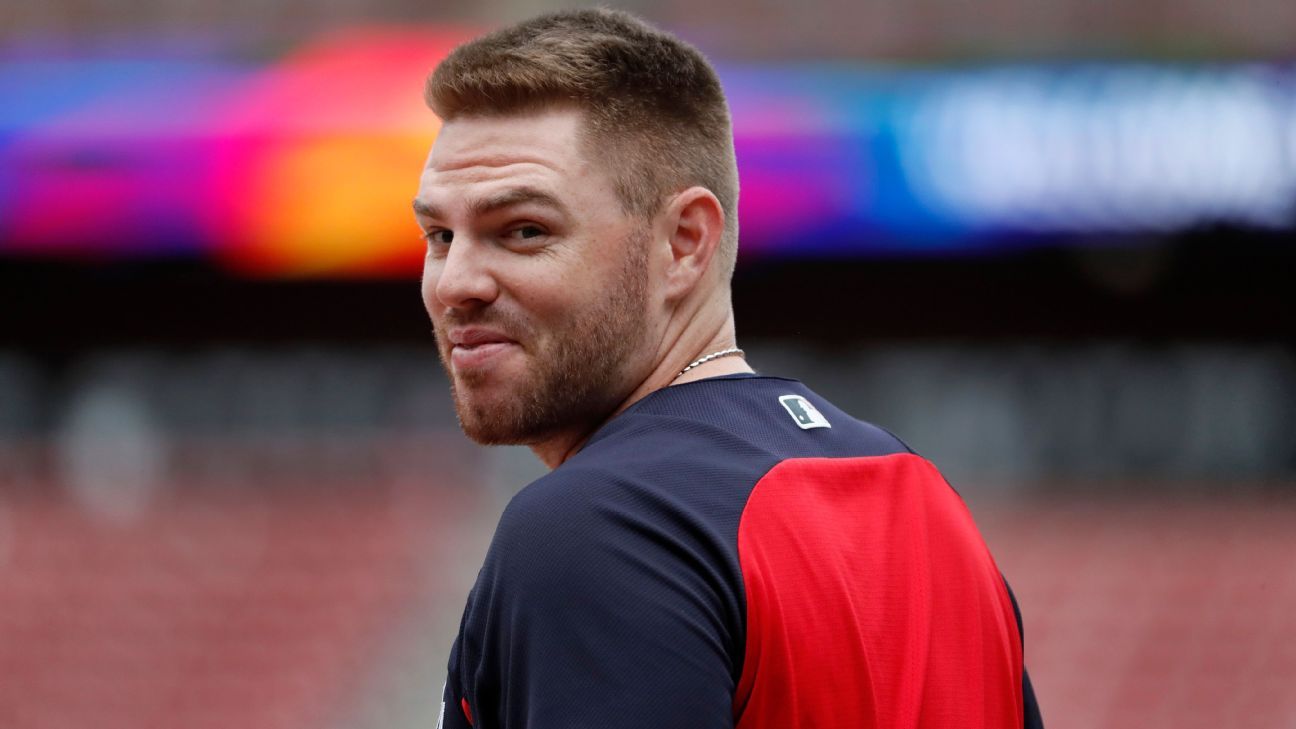 Freeman prayed for his life while battling virus