President Trump calls the press “enemies of the people.” His wife, then the future first lady, shrugged off murderous anti-Semitic abuse of a Jewish journalist as “provoked” by the journalist’s reporting on Melania Trump’s Slovenian origins. Trump regularly shares on Twitter images of fantasy violence against the press.

White House staffers regularly speak glaring untruths. Just a few weeks ago-March 27, 2018-White House Press Secretary Sarah Huckabee Sanders told journalists from the White House rostrum that a question about citizenship status has “been included in every census since 1965, with the exception of 2010 when it was removed.” She repeated the same claim later in the same briefing. In fact the question had last been asked in 1950.

And then the Trump White House laments that journalists don’t respect them.

This two-facedness baffles elite journalists, Washington’s preeminent enforcers of decencies and courtesies. After the dinner, Pulitzer Prize winner Maggie Haberman tweeted a message of solidarity with Sanders, a butt of comedian Michelle Wolf’s jokes. “That ‪@PressSec sat and absorbed intense criticism of her physical appearance, her job performance, and so forth, instead of walking out, on national television, was impressive.” That was nice of Haberman, reputedly a very nice person. But only eight days previous, the press secretary’s boss-the president-had tweeted abuse at Haberman at least as harsh as anything Wolf said about Sanders. “The New York Times and a third rate reporter named Maggie Haberman, known as a Crooked H flunkie who I don’t speak to and have nothing to do with, are going out of their way to destroy Michael Cohen and his relationship with me in the hope that he will “flip.”…” Surely Trump’s own behavior toward free media and standards of truth might color how journalists and those who care about journalism react to Trump and his enablers? 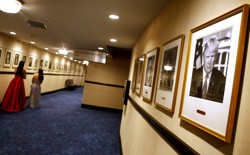 A Century of Feuding Between Presidents and the Press

Journalists live by codes: They protect sources, they respect the distinction between conversations on and off the record, they avoid unnecessary reporting on personal lives. By and large, these codes serve important ends, both practical and ethical. But what happens when bad people leverage the codes of others for selfish ends of their own? When White House staff defame the acting FBI director for his wife’s state-level political activities-and then erupt in rage when asked about the political activities of their own spouses? The basis of a working ethical system is mutual good faith, but the creed of the Trump White House is bad faith all around.