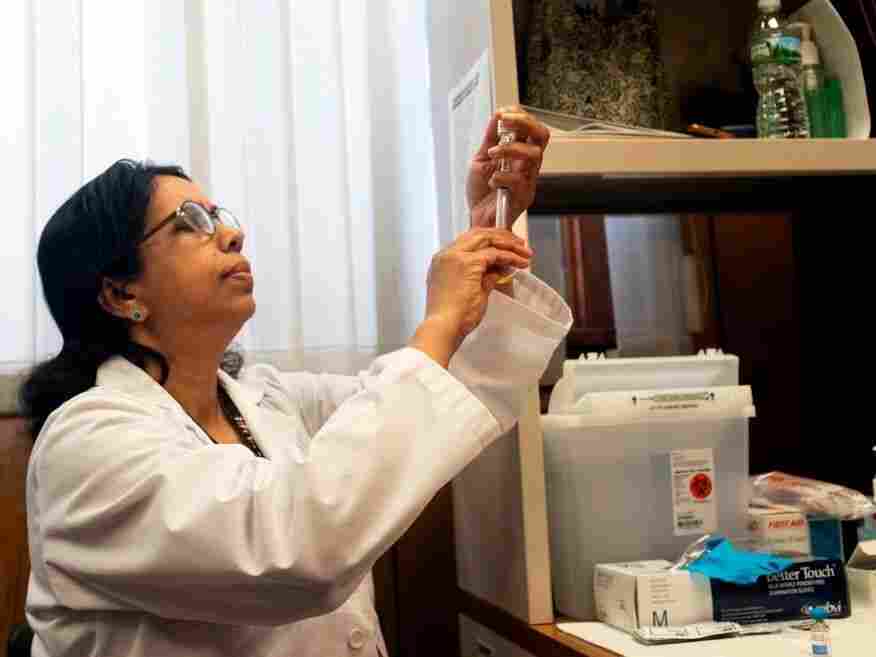 So far this year, the U.S. has confirmed 555 measles cases, the Centers for Disease Control and Prevention announced Monday. That’s 50 percent higher than the total number recorded last year, even though we’re only about a quarter of the way through 2019.

And the virus isn’t slowing down.

“The number of cases is accelerating,” says Dr. Amanda Cohn, a senior advisor for vaccines at the CDC. “We are on track to have one of the highest numbers of cases of measles reported since we eliminated the disease in the year 2000.”

The majority of the new cases are connected to an outbreak in New York City and New York State, Cohn says.

“This is a very significant outbreak,” she says. “These cases were imported from other countries, but because of low vaccination coverage in these communities, measles is spreading widely throughout these communities.”

Last week, New York City declared a public health emergency in an ultra-Orthodox community in Williamsburg, Brooklyn, and New York City’s health department is mandating parents vaccinate their children, else they may face a $1,000 fine.

The CDC pointed to four other places with ongoing outbreaks in the U.S.: Clark County, Washington; Oakland County, Michigan; two counties in New Jersey; and a handful of counties across California.

Several countries around the world are currently experiencing massive measles outbreaks. Madagascar has recorded more than 100,000 cases since the fall, with more than 1,200 deaths. The Ukraine has recorded about 37,000 cases this year. And the European Union is tallying about a thousand cases a month.

Globally, the World Health Organization reports that measles cases in the first quarter of 2019 nearly quadrupled compared to what was reported at this time last year.

More American families are bringing measles home with them after traveling abroad, Cohn says. And once the disease lands stateside, it has a better chance of gaining a foothold because vaccination rates have dropped in some places below 93 to 95 percent, the threshold required to protect the entire community.

“When you make the decision not to vaccinate your child, please understand you’re also making that decision for the people around your child,” New York City’s Deputy Mayor of Health and Human Services, Herminia Palacio, told NPR on Wednesday.

Measles can be an extremely serious disease. About 25 percent of infected children are hospitalized. About 10 percent of children develop ear infections, which can cause permanent hearing damage. In about 1 in 1,000 cases, the infection becomes life-threatening. In these cases, the virus moves to the brain, causing encephalitis and convulsions. Children can be left deaf, blind or with mental retardation – if they recover.

Before the development of the measles vaccine in the 1960s, the U.S. recorded nearly a half million cases each year, the CDC says. About 48,000 kids were hospitalized and about 500 people died per year.

“We eliminated measles from this country in 2000, and … I think we eliminated the memory of that virus,” Dr. Paul Offit of Children’s Hospital of Philadelphia told NPR’s Weekend Edition Sunday. “People don’t remember how sick it could make you.”