CINCINNATI – An Ohio prison staff acted with callous indifference as a white supremacist attacked four black inmates handcuffed to a table, according to a federal lawsuit filed earlier this month in the Southern District of Ohio.

Two correctional officers, identified only by their surnames, Faye and Dalton, laughed as the four black inmates were brutally stabbed in June 2017, the suit says. The incident was captured on surveillance footage and viewed by millions.

The suit seeks $75,000 in damages on behalf of two of the victims, Shamieke Pugh and Maurice Lee. It claims the victims’ civil rights were violated, including that they suffered cruel and unusual punishment because of the prison guards’ inaction.

According to the lawsuit:

Pugh, Lee and two other black inmates were strip searched before they were allowed out of their cells for recreational time. They were then handcuffed to a table.

But Greg Reinke, who pleaded guilty in the attack, was not strip searched before he was cuffed to an adjacent table.

Reinke is identified in the suit as a member of the Aryan Brotherhood, a violent white supremacist group.

Guards “gave Reinke a key” or “knew or should have known that Reinke” had a key or device to unlock his handcuffs. 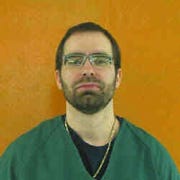 This undated file photo provided by the Ohio Department of Rehabilitation and Correction shows Greg Reinke. Reinke, who stabbed four fellow prisoners and a guard in separate bloody attacks, is on a hunger strike inside Ohio’s toughest prison, alleging mistreatment. (Photo: Uncredited, AP)

Faye and Dalton, the guards, stood nearby behind a locked door and “laughed as Mr. Pugh, Mr. Lee and the other inmates were stabbed.”

Two of the inmates suffered several stab wounds and heavy bleeding while the other two sustained minor injuries.

After one victim escaped his cuffs and tackled Reinke, guards pepper-sprayed the victim and not Reinke.

The guards, including a sergeant identified as John Doe, did not immediately render aid to the victims, and 10 minutes passed before nurses arrived.

At one point, one of the guards said, “We should just let them die.” The guard who made the statement is not specifically identified in the suit.

Reinke had a history of carrying knives. On two occasions prior to June 2017, he’d stabbed or attempted to stab other inmates.

The Lucasville prison’s warden, Ronald Erdos, is also named as a defendant in the suit, which says he and the facility’s staff knew Reinke was a violent threat, “yet did nothing to prevent this violence.”

The suit includes 11 charges of civil rights violations, including that the victims’ right to equal protection was violated.

In addition to Faye, Dalton and Erdos, the suit also names as defendants unidentified nurses, health care provider and other correctional officers.

Reinke was sentenced to 54 years in the bloody attack, video of which was obtained by the Associated Press and went viral late last year.

Reinke was sentenced to an additional 32 years behind bars for an attack about eight months later on a corrections officer. Prosecutors said Reinke and another inmate stabbed the officer 32 times.

Reinke was already serving a life sentence for a 2004 Cleveland murder before the stabbings.

The AP recently reported Reinke is on a hunger strike because he believes he’s being mistreated in prison.