Their dung consumes the oxygen around it, creating lethal pulses of suffocating water.

At night, hippos wander into grasslands to graze. During the day, they return to rivers to keep cool and protect themselves from sunburn. As they wallow, they constantly urinate and defecate. Every day, the 4,000 or so hippos in the Mara deposit about 8,500 kilograms of waste into a stretch of river that’s just 100 kilometers long. “Down at the bridge, you can put a net in the water for a few seconds, and the entire middle will just be coated with hippo feces,” says Dutton. “There’s hippo feces everywhere. Over the rocks. Over the bottom.”

In the dry season, when the Mara becomes narrower and shallower, certain stretches of it become especially thick with hippos-and their dung. Hippos are aggressive and dangerous, so only the foolhardiest of researchers would wade into these so-called hippo pools. Instead, Dutton and Subalusky deployed a remote-controlled boat armed with sensors. It revealed that the mud and water at the bottom of these hotspots is a stagnant mess of ammonia, methane, hydrogen sulfide, and other chemical grotesqueries. It’s also starved of oxygen: Almost all of the gas is consumed by bacteria as they slowly digest the accumulated hippo poop.

During heavy rains, extra water floods into the hippo pools, churning up the putrefying muck and sending it off downstream. For good reason, these events are called “flushing flows.” To study them, Dutton and Subalusky used an oxygen-logger-an arm-long cylindrical device that, to the untrained eye, looks rather like a pipe bomb. “We always get stopped at airports,” Dutton says. Once dangled off the side of a bridge, the logger revealed that flushing flows dramatically reduce the oxygen levels of the downstream river, often to levels that are lethal for many aquatic animals. That, says Dutton and Subalusky, suffocates the fish.

The duo went out of their way to confirm this idea. They added hippo poop to bottles of water and demonstrated that oxygen levels fall. They added poopy water to “experimental streams”-long trays designed to simulate a flowing river. But they still craved a more realistic experiment. “We were talking about ways of how we could create a flood through a pool, and some other researchers said: Why don’t you build a small dam?”

Inspired, the duo used sandbags to block off the water supply to a nearby pool that’s in hippo territory but not frequented by the animals. A Maasai fixer connected them to a guy who had a large truck, another guy who owned two huge 4,000-liter tanks, and a third guy who owned a large wastewater pump. With all of that, the team transferred 16,000 liters of soiled hippo water into their artificial pool. And when they released the sandbags, they found that oxygen levels did indeed plummet in the water downstream.

Bizarrely, this is the second study to be published this week on how hippo poop affects river environments. Keenan Stears, from the University of California at Santa Barbara, did similar work in Tanzania’s Great Ruaha River. Unlike the Mara, the Ruaha’s waters have been heavily drained by upstream farms. During the dry season, it stops flowing altogether, and its hippos are confined to isolated pools. Stears found that pools with lots of hippos have much less oxygen than those where the beasts are rare. As such, they had half the diversity of fish and invertebrate species, and just 4 percent the numbers of fish. Only in the wet seasons, when water once again flowed between the pools, did the fish and invertebrates bounce back. 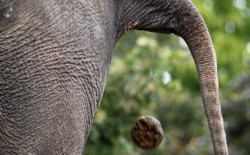 Stears estimates that around 94 percent of hippo populations in Africa live in rivers like the Ruaha that have either already started to dry up or will likely do so as the climate changes. “The results from our study are indicative of emerging issues relevant to the whole of Africa,” he says.

This “reinforces the need to maintain flows in these river systems during the dry season,” adds Frank Masese, from the University of Eldoret in Kenya.

But Dutton and Subalusky’s study shows that hippos and their oxygen-sucking waste can occasionally be problematic, even in relatively pristine rivers like the Mara. And their work challenges us to reconsider what pristine even means.

Last year, the duo showed that migrating wildebeest nourish the Serengeti by drowning en masse in the Mara, adding about 1,100 tons of dead meat to the river every year. “The Mara really is a unique system,” Subalusky says. Hippos and wildebeest act as conveyor belts, channeling land-based nutrients into the water in the form of excrement and carcasses. And that water runs through a landscape that’s dominated by herds of elephants, and thousands of zebras and gazelles.

In this way, the Mara reflects what rivers elsewhere in the world might have once looked like, before humans slaughtered their way through mammoths, bison, and other megafauna. It’s not a babbling brook of clear water. It’s a world of dead bodies, putrefying poop, and the occasional wave of suffocation.