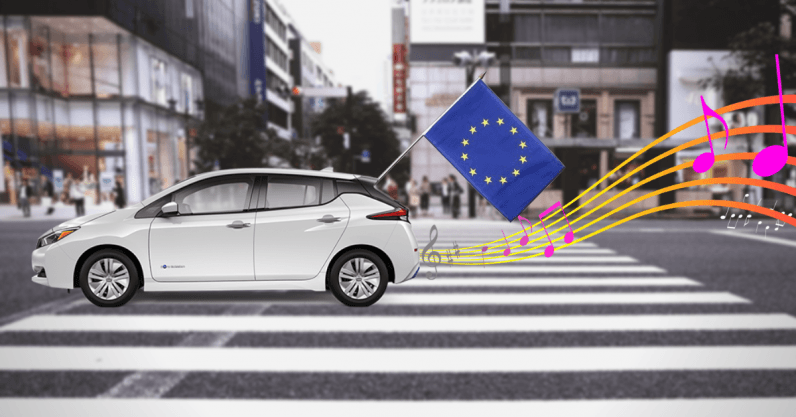 Starting July 1, all electric vehicles with four or more wheels in the EU will be required to emit noise of at least 56 decibels if the car is going 20 km/h or slower, the New Atlas reports.

This makes a ton of sense as electric cars don’t make any of the engine noises we’ve grown accustomed to from standard Earth-killing gasoline cars. Making sure pedestrians can hear cars coming could increase the safety of visually impaired individuals, as well those of us who have the bad habit of walking into traffic while looking at their phones.

The EU legislation will therefore require electric cars to artificially implement sounds to make up for this with an “Acoustic Vehicle Alerting System” that will have to rise and fall to indicated whether the vehicle is accelerating or decelerating. This won’t be particularly noisy as 56db is about the level of noise a refrigerator makes – just enough to warn you a car is close.

But there’s an interesting detail missing from the new legislation: there’s no mention of what the sound must be. This opens up a whole world of possibilities. Crazy chicken-clucking sounds? Please. A recording of Formula 1 drivers imitating race car sounds? Sign me up.

Unfortunately, it seems car manufacturers want to play it a bit safer. They’ve actually been working on this for years along with other researchers, and most electric cars do have some artificial sounds already. Rather than the sputtering swagger of combustion engines, a large number of EVs use sounds with a highly-engineered feel to it.

The new Nissan Leaf, for example, recently got a new futuristic sound – you can see how it was made in the video above – but I’m sad they’ve moved away from emulating the car sounds from Blade Runner.

But lastly, the real shock of the EU’s new legislation is its effect on office duels. If you intend to ambush your colleagues in the parking lot, the Honda Prius will no longer be the ideal weapon for the job