Home Business End of an era in Indian banking
Share on Facebook
Tweet on Twitter
‘With Allahabad Bank set to be amalgamated with Indian Bank, the legacy of the oldest existing joint stock bank in India is set to fade. ‘The post-nationalisation period marked the turbulent journey to transform for Allahabad Bank from bank of nawabs and rajahs to one of farmers and artisans. ‘It also marks the end of a bank in which two states with contrasting identities – Uttar Pradesh and West Bengal – took equal pride, says Namrata Acharya. 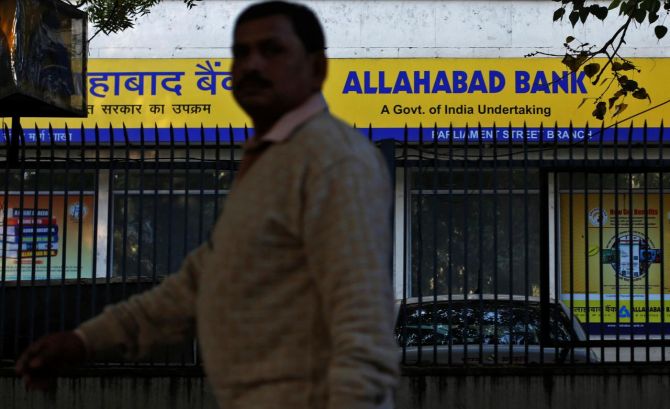 In Satyajit Ray’s detective fiction Joi Baba Felunath, in one of the scenes, the protagonist, Feluda, is apprised of the crème de la crème of Kashi (Varanasi) by a hotel manager.

Among the luminaries, the first reference is to an agent of Allahabad Bank, as an employee was known then, followed by prominent academics and businesspersons.

That’s the kind of prestige the mid-sized public sector establishment commanded till about a few decades ago.

With Allahabad Bank set to be amalgamated with Indian Bank, the legacy of the oldest existing joint stock bank in India is set to fade.

It also marks the end of a bank in which two states with contrasting identities – Uttar Pradesh and West Bengal – took equal pride.

Today there are more protest marches against the amalgamation in Allahabad, where the bank was born, than in Kolkata, where the headquarters of the bank is located.

Although in both the cities the angst of losing a historical identity runs deep, Allahabad saw the genesis of a home-grown bank that has witnessed a long history.

“People have a strong bonding with Allahabad Bank in UP.

“For the past few months, we were working even on holidays to ensure the turnaround of the bank.

“It is a bank with a rich heritage and history, and naturally there is a sense of loss of this prestigious identity among the employees,” said R N Shukla, state secretary, UP, All India Allahabad Bank Officers Association.

“With the amalgamation, we are losing a heritage institution.”

Set up before the mutiny, in 1856, Allahabad Bank was mostly nurtured by the Scots, known for their prudent banking.

It was set up at a time when the Presidency Banks ruled the roost, and private-sector banks were short-lived.

While a number of foreign banks had established set-ups in India in the mid-19th century, the need to set up a local bank in Allahabad was necessitated by a booming trade in the city, well connected with the railways.

The bank initially commenced operations on small premises on the first floor of a building in the busy Chowk area in Allahabad.

In the initial years, it cautiously stayed away from profitable businesses like export finance and foreign exchange.

Most credit proposals were vetted at the board level and several were turned down.

In the first eight months, the net profit of the bank was Rs 2,300, according to a book on the history of Allahabad Bank, released on its 150th anniversary.

The legacy of Allahabad Bank is stuffed with interesting anecdotes.

Spearheading the job of setting up the bank was entrusted to a physician, J F Beatson, because of his social standing and credibility, the two values which the bank adhered to.

The will of Jawaharlal Nehru was lodged with the Scindia House branch of the bank.

To maintain a clean balance sheet, the bank turned down several offers by smaller banks for merger.

However, in 1920, the P & O Banking Corporation offered a bid price of Rs 436 per share for Allahabad Bank, much higher than its all-time high share price.

Finally, Allahabad Bank was taken over by P & O Banking.

However, it was kept as a separate entity, but the headquarters of the bank was relocated to Kolkata.

Allahabad Bank was still allowed to maintain its separate identity.

After independence, Allahabad Bank was treated as foreign enterprise, but its profits continued to rise – from Rs 1.6 million in 1955 to Rs 1.7 million in 1960.

The bank continued to have Britons in key positions, which also led to agitations in Kolkata.

In 1969 Allahabad Bank was nationalised, with the argument being that as Allahabad Bank had both its head office and registered office in Kolkata, for all practical purposes it was an Indian bank.

Thereafter, about £1.3 million was paid in annual instalments to Standard Chartered Bank.

In the first year of nationalisation, the bank’s advances grew substantially, largely due to flow to priority sector lending and the Green revolution.

The post-nationalisation period marked the turbulent journey to transform for Allahabad Bank from bank of nawabs and rajahs to one of farmers and artisans.

Yet the bank continued a tightrope walk, and like other banks faced skyrocketing NPAs in the 1990s. But it turned around in 1995-96.

Allahabad Bank owned prestigious properties across India, including in Parliament Street in New Delhi, Peddar Road in Mumbai, and India Exchange Place in Kolkata, apart from heritage properties that in places like Allahabad, Nainital, Meerut, Jhansi, and Kanpur.

The sprawling headquarters of the bank in Kolkata is on 2, N S Road, which once belonged to the Maharaja of Burdwan.

In a few months, as the buildings will get a new signage, it will also mark the end of an era in Indian banking.