Home Health Don’t use onion: B’desh PM told her cook post export ban
Share on Facebook
Tweet on Twitter
The Bangladeshi prime minister said that India’s sudden decision to stop onion exports has led to a bit of difficulty for her countrymen. 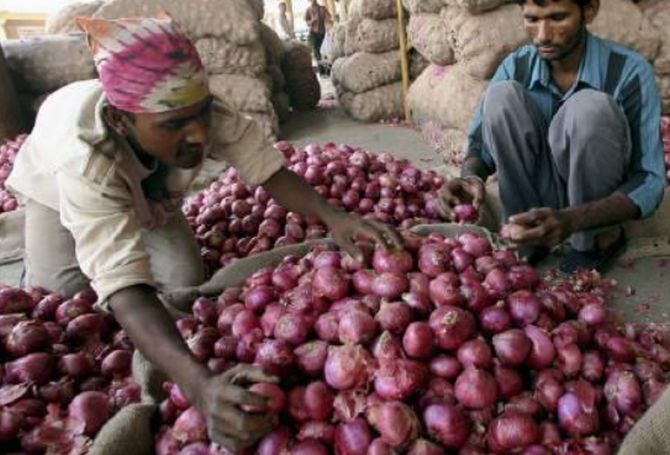 India’s onion export ban seems to have impacted even Bangladesh Prime Minister Sheikh Hasina’s kitchen and she feels it would help if such decisions are taken with prior notice given her country’s significant dependence on the neighbour for this agri produce.

The Bangladeshi prime minister said that India’s sudden decision to stop onion exports has led to a bit of difficulty for her countrymen.

“I don’t know why you stopped onion (exports). So what I did, I told my cook not to use onion in food… Prior notice of such decisions would help.

“Suddenly, you stopped and it became a difficulty for us. In future, if you are taking such a decision, prior information would help,” she said in a lighter vein.

She was addressing India-Bangladesh Business Forum in New Delhi, which was organised by industry chambers, including CII and Assocham. Commerce and Industry Minister Piyush Goyal was also present at the event.

Reacting to Hasina’s comments, External Affairs Ministry spokesperson Raveesh Kumar said, “We are trying to see how we can kind of accommodate the concern which has been reflected by the Prime Minister of Bangladesh.”

Last Sunday, India banned exports of onion to increase availability of the commodity in the domestic market and contain spiralling prices.

The Centre also imposed stock limits on both retail and wholesale traders for onion.

Further talking to enhancing trade and investments between the two countries, she said huge potential exists in Bangladesh for the Indian business community in different sectors.

She said that Bangladesh has the most liberal investment policy in South Asia, and it includes protection of foreign investment by law; generous tax holiday; concessionary duty on import of machinery; unrestricted exit policy; full repatriation of dividend and capital on exit, to name a few.

“We are in the process of establishing 100 Special Economic Zones. About a dozen of them are ready with four allotments to three countries.

“Bangladesh has offered three zones for Indian investors at Mongla, Bheramara and Mirsarai.

“Substantial investment from Indian investors in these three Indian Economic Zones in Bangladesh would help broaden our exportable base.

“We also want to see trade and investment together where Indian big investors can set up industries in Bangladesh and export the products to the north-eastern states of India and to South-east Asian countries taking advantage of the improved connectivity between us,” Hasina said.

The prime minister said that the strategic location of Bangladesh provides tremendous potential for being the economic hub of the region.

With India on the west, China on the north and Southeast Asia on the east, Bangladesh is in the middle of a combined market of 4 billion people, she said, adding the volume of bilateral trade has steadily grown during the past years.

“The balance of trade, however, is still largely in India’s favour.

“The volume of trade between the two countries is nearly $ 10 billion.

“In 2018, Bangladesh was India’s eighth largest export destination with $ 8.8 billion export and our export to India also crossed $ 1 billion mark for the first time last year.

“So, the progress is visible, but there is a lot of scope for further deepening our relations in the area of trade and investment,” she said.

Goyal said that Indian businesses should grab opportunities in the neighbouring country.

“There are so many areas where businesses of both countries can increase cooperation. Grab the opportunity that Bangladesh offers,” he suggested.

“Further, he said that a lot of potential exists in railways also and India is ready to share its expertise in the development of this sector in Bangladesh.

“India is looking to increase the frequency of three trains between the two countries, he added.

“We are looking at making entire railways between the countries a seamless movement for goods and people,” he added.

Commenting on the economic relations between the two countries, SAARC Chamber of Commerce & Industry (SCCI) Vikramjit Singh Sahney said that both the countries have huge potential to increase trade and investments.

He said that the line of credit extended by India to Bangladesh should include fertiliser plants also and “there is a need to open more chek posts and skill training centres to enhance capacity building”.

On this occasion, two Government to Business (G2B) MoUs were signed between Startup Bangladesh and Tech Mahindra and Bangladesh Economic Zones Authority and Adani Ports and SEZs.