In a rambling interview, the president threatened to intervene in the Justice Department, disclosed “very, very secret” meetings with North Korea, and revealed that Abraham Lincoln was a Republican.

President Trump isn’t great at avoiding trouble. On Thursday alone, his nominee to lead the Department of Veterans Affairs, Ronny Jackson, withdrew amid allegations of misconduct; his EPA administrator, Scott Pruitt, is set to be grilled about allegations of misconduct on Capitol Hill; and his long-time fixer, Michael Cohen, was set to appear at a court hearing in Manhattan, a day after saying he’d invoke his Fifth Amendment right against self-incrimination in a suit in California. 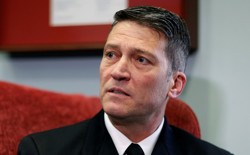 But if Trump can’t avoid problems, when they crop up, he can at least try to grab the spotlight himself. That’s what the president did during a wide-ranging and characteristically bizarre call-in to Fox and Friends Thursday morning. It was the president’s first television interview in some time-he called in to another Fox show two months ago-and he didn’t hesitate to make news, if not sense. The hosts seemed shellshocked when it was over.

“I think he was awake and had a lot to say,” Steve Doocy said.