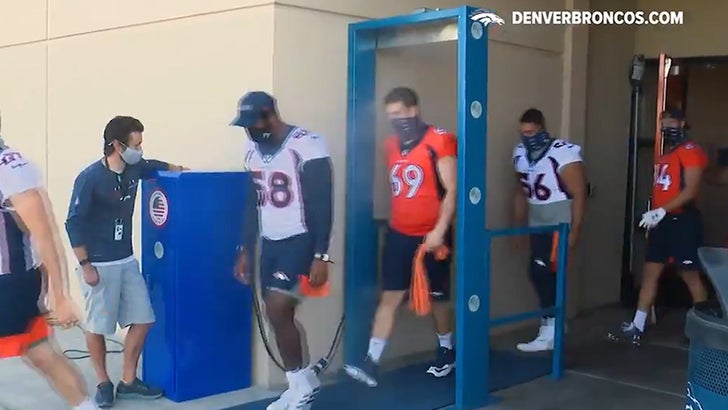 The Denver Broncos have installed a special “misting booth” at the team facility — which sprays a disinfectant on players to and from practice in hopes of killing the COVID virus.

The Broncos posted footage of the machine on Monday — saying, “Time for work. But first, we sanitize.”

We’re told the booth is spraying a product called “MicroSURE” — which is touted as a powerful nontoxic disinfectant that kills viruses like E.Coli, Staphylococcus aureus and Coronavirus upon contact.

A rep for the Broncos tells us, “We want to go above and beyond to protect the players.”

“The misting booth is an additional safety measure that sprays a safe, medical-grade disinfectant on players and their equipment when entering and exiting the practice field.”

The Broncos have already had a serious COVID scare this off-season when star linebacker Von Miller tested positive for coronavirus back in April.

Miller was symptomatic — but has since recovered. He’s called on others to take the virus seriously.