Shares of Broadcom tanked nearly $16 after the semiconductor giant said the trade war could dent operations by billions of dollars. The market, however, didn’t seem to flinch, with the major indexes slipping 0.52% or less during the session.

“The most important thing to watch next week is Twitter – we’re watching for a president who slags China regularly,” the “Mad Money” host said. “While I think he’s got a point, the stock market hates it, so be prepared to use any trade war-inspired weakness as a buying opportunity.” 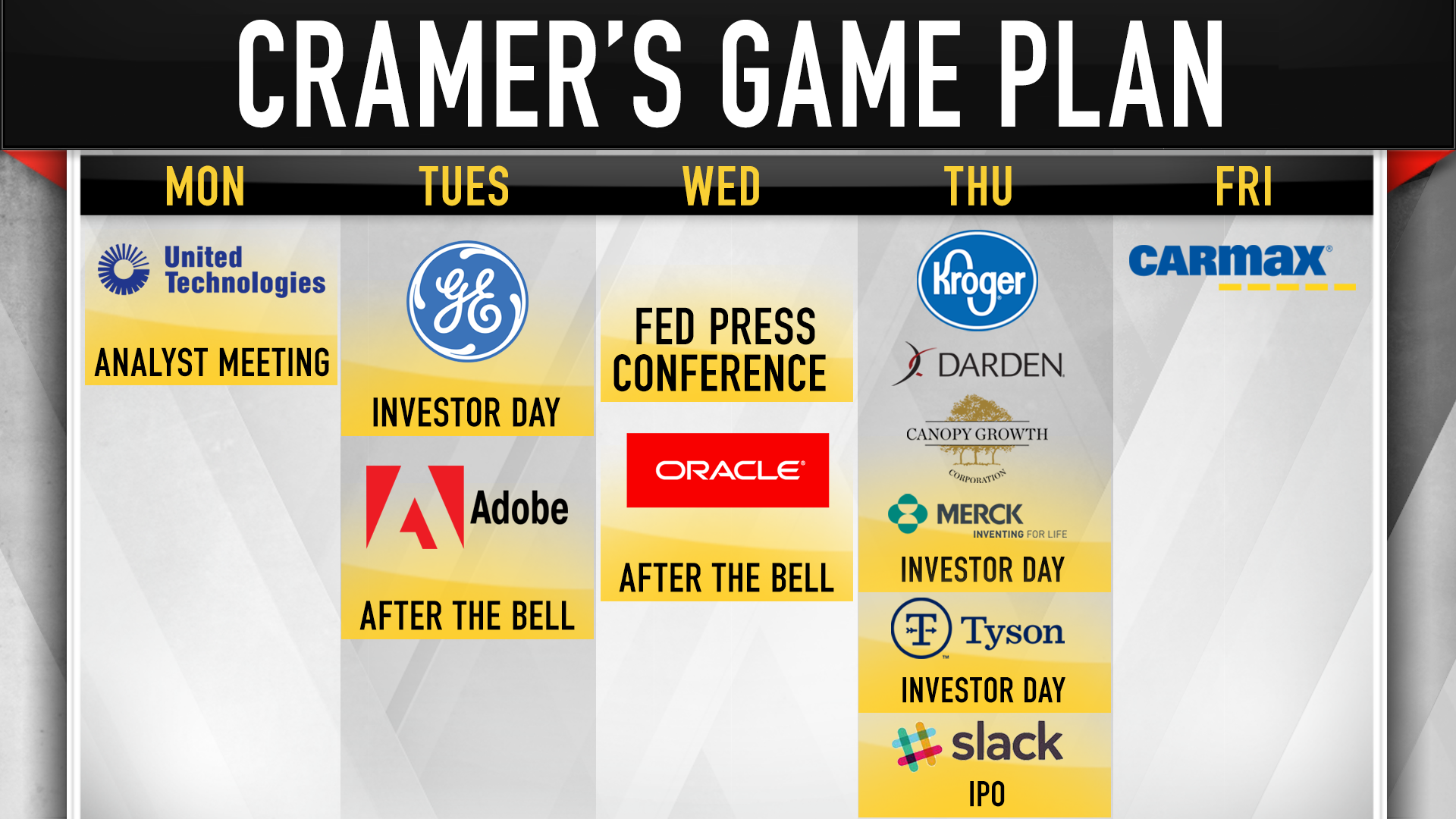 United Technologies: United Technologies will host an analyst meeting at the annual Paris Airshow. Wall Street wants to know more about its $100 billion merger with Raytheon, which has gotten some push back from shareholders.

“I think the deal is a bit confusing, and for most investors confusion means sell,” Cramer said. “You can still win by owning United Technologies for the breakup alone. I bet CEO Greg Hayes tells a darn good story and I think he’ll address the issues facing Boeing, too.”

General Electric: General Electric will hold its own analyst meeting from the Paris Airshow. Investors have been wary of the hype that management is selling, but Cramer has faith in CEO Larry Culp.

“Now, GE’s been stuck around $10 for months. Their aerospace business is the crown jewel. I they’re gonna have a lot of orders,” he said. “I bet the stock could go higher.”

Adobe: Adobe has an earnings call after the markets close. Cramer is anticipating a good story out of CEO Shantanu Narayen, and thinks Adobe could be the standout among his so-called group of “Cloud King” stocks.

“But the question is: will people care? That’s a different story. We’ve seen many of the cloud kings lay eggs, the kind that don’t hatch, after they report,” Cramer said. “Of course, if Adobe gets hit after a good number, I want you to buy it.”

Federal Reserve: Fed Chair Jerome Powell is scheduled to deliver his latest comments on the economy at a press conference. Investors are looking for signs that the central bank will cut interest rates.

“I think Powell may want to have more info than he currently has at his disposal before he takes action,” Cramer said. “That’s okay, I get that. Expressing vigilance should be enough to keep the bulls happy.”

Oracle: Oracle reports earnings after the bell. The stock is up more than 18% this year, but has traded in the low $50 range for the past three months. The enterprise software company has been battling Salesforce and Workday for business.

“I’m not that particularly enamored of the stock, but at less than 15 times earnings next year it’s hard to dislike Oracle ahead of the quarter,” he said.

Kroger: Kroger delivers quarterly results before the market opens. Walmart, Amazon, Costco and Target have all posed a challenge for the grocery chain, Cramer said.

“It’s tough to be in the grocery business these days, people,” he said. “I’m glad I’m not in it. Kroger’s been spending a lot of money trying to localize its stores, but this is a new world and they can’t seem to gain any traction.”

“This acquisition has left Wall Street scratching its collective head, but if Lee can explain why it made sense … well then Darden’s gonna get its mojo back,” he said.

Canopy Growth: Shareholders will get quarterly results from Canopy at the end of the trading day. Cramer said CEO Bruce Linton should have something good to say about the medicinal and recreational benefits of cannabis.

“I think this is another stock that will be rangebound until Canopy starts capitalizing on the medical side, especially because the outgoing FDA chairman, Scott Gottleib, he was openly critical of the benefits of medicinal marijuana when he came on our network not that long ago,” Cramer said.

Merck: Merck will host an analyst day. The drug maker could give a positive update about its Keytruda cancer treatment, which has taken share from Bristol-Myers Squibb, Cramer said.

“You buy Merck’s stock ahead of the meeting, particularly if it gets hit because of the Fed conference, then you take the trade off, you ring the register on Merck, and you take the proceeds and then you buy Bristol-Myers if Bristol-Myers’ stock goes down as I think it will,” he said.

Tyson Foods: The meat giant will hold an analyst day where Cramer wants to learn about its strategy for plant-based nuggets and blended meats.

“Lots of short-sellers are betting that Tyson can knock down Beyond Meat after this analyst meeting. Simplistic,” Cramer said. “There’s room enough for both of them in the faux-meat space.”

Carmax: Carmax reports earnings before the bell. The used car business has been able to outperform the broader auto sector.

“That’s why I think on Friday Carmax will deliver yet another strong quarter,” Cramer said. “There’s a lot to like here, especially now that long-term interest rates have come down, making it cheaper for people to get financing.”

WATCH: Cramer delivers his game plan for the week ahead

Uber’s lockup expiration could ‘hobble the entire market’ even more than Beyond Meat, Jim Cramer warns