After dropping after the weekend, the market struggled to pare losses for the remainder of the last week.

The anomaly between the indices returns was due to the fact that Nifty had a heavyweight (Infosys) witnessing an out of ordinary fall.

In terms of open interest activity, Nifty added around 8 percent shorts in the first session itself and, in a series of ups and downs, just managed to cover little over 2 percent of it.

On the other hand, Bank Nifty this time had no such concerns. The week was yet another round of short-covering with the index ending up with around a percent gain with an over 7 percent drop in open interest.

Interestingly though, many of its constituents did manage to add longs and carry them forward for the final week of October expiry.

Stock futures were slightly tilted towards fresh shorts with unwinding and fresh long candidates equally divided. Many sectors saw the shorts getting reinstated that got covered a week before like metals led by Jindal twins and Tata Steel and media.

Loss lin Infosys dragged the entire IT down into shorts, along with Telecom, led by both Bharti and Idea. Banking, on the other hand, added longs especially with SBI leading the charge of PSUs and ICICI leading longs in private banks.

Sentimentally, we already began this week with a high optimism as the OIPCR was at 1.43, at the upper end of the recent trading band. So, a respite we got was due.

As Nifty took a tiny step back the call writers started crowding out. This pushed the OIPCR to near neutrality mid-week but there was a respite, in the end, pushing it to 1.21 to close business for the week.

On the risk front, within this struggle of indices India VIX dropped a bit pointing towards a possibility of this struggle being more temporary in nature.

For Bank Nifty, the range of 29,000-30,000 remains fairly congested. However, the level of 29,500 is also congested with calls and if taken out could open up a quick 2 percent room for the index.

Despite struggle in Nifty, Bank Nifty did pick up the pace and covered a few shorts and many heavyweights added longs. A move up to 30,000 and beyond is expected, hence, a modified call butterfly is advised. 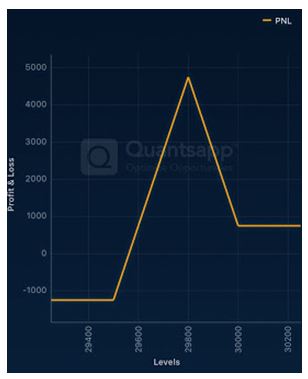 Modified call butterfly is a 4-legged strategy where 1 lot of call close to current underlying level is bought against that 2 lots of higher strike calls are sold and 1 more lot of call is bought but closer to the call sold strike. This keeps the lower but constant profits in case of an upward breakout. This is a fairly risk-averse and a universal strategy.

(The author is CEO & Head of Research at Quantsapp Private Limited.)