If conservatives want to save the GOP from itself, they need to vote mindlessly and mechanically against its nominees.

A few days after the Democratic electoral sweep this past November in Virginia, New Jersey, and elsewhere, The Washington Post asked a random Virginia man to explain his vote. The man, a marketing executive named Toren Beasley, replied that his calculus was simply to refuse to calculate. “It could have been Dr. Seuss or the Berenstain Bears on the ballot and I would have voted for them if they were a Democrat,” he said. “I might do more analyses in other years. But in this case, no. No one else gets any consideration because what’s going on with the Republicans-I’m talking about Trump and his cast of characters-is stupid, stupid, stupid. I can’t say stupid enough times.”

Subscribe to The Atlantic and support 160 years of independent journalism

Count us in, Mr. Beasley. We’re with you, though we tend to go with dangerous rather than stupid. And no one could be more surprised that we’re saying this than we are.

We have both spent our professional careers strenuously avoiding partisanship in our writing and thinking. We have both done work that is, in different ways, ideologically eclectic, and that has-over a long period of time-cast us as not merely nonpartisans but antipartisans. Temperamentally, we agree with the late Christopher Hitchens: Partisanship makes you stupid. We are the kind of voters who political scientists say barely exist-true independents who scour candidates’ records in order to base our votes on individual merit, not party brand.

This, then, is the article we thought we would never write: a frank statement that a certain form of partisanship is now a moral necessity. The Republican Party, as an institution, has become a danger to the rule of law and the integrity of our democracy. The problem is not just Donald Trump; it’s the larger political apparatus that made a conscious decision to enable him. In a two-party system, nonpartisanship works only if both parties are consistent democratic actors. If one of them is not predictably so, the space for nonpartisans evaporates. We’re thus driven to believe that the best hope of defending the country from Trump’s Republican enablers, and of saving the Republican Party from itself, is to do as Toren Beasley did: vote mindlessly and mechanically against Republicans at every opportunity, until the party either rights itself or implodes (very preferably the former).

Of course, lots of people vote a straight ticket. Some do so because they are partisan. Others do so because of a particular policy position: Many pro-lifers, for example, will not vote for Democrats, even pro-life Democrats, because they see the Democratic Party as institutionally committed to the slaughter of babies.

We’re proposing something different. We’re suggesting that in today’s situation, people should vote a straight Democratic ticket even if they are not partisan, and despite their policy views. They should vote against Republicans in a spirit that is, if you will, prepartisan and prepolitical. Their attitude should be: The rule of law is a threshold value in American politics, and a party that endangers this value disqualifies itself, period. In other words, under certain peculiar and deeply regrettable circumstances, sophisticated, independent-minded voters need to act as if they were dumb-ass partisans.

The second unforgivable sin is Trump’s encouragement of a foreign adversary’s interference in U.S. electoral processes. Leave aside the question of whether Trump’s cooperation with the Russians violated the law. He at least tacitly collaborated with a foreign-intelligence operation against his country-sometimes in full public view. This started during the campaign, when he called upon the Russians to steal and release his opponent’s emails, and has continued during his presidency, as he equivocates on whether foreign intervention occurred and smears intelligence professionals who stand by the facts. Meanwhile, the Republican Party has confirmed his nominees, doggedly pursued its agenda on tax reform and health care, and attacked-of course-Hillary Clinton.

We don’t mean to deny credit where it is due: Some congressional Republicans pushed back. Last year, pressure from individual Republicans seemed to discourage Trump from firing Attorney General Jeff Sessions and probably prevented action against Special Counsel Robert Mueller. Moreover, Republicans as a group have constrained Trump on occasion. Congress imposed tough sanctions on Russia over the president’s objections. The Senate Intelligence Committee conducted a serious Russia investigation under the leadership of Richard Burr. But the broader response to Trump’s behavior has been tolerant and, often, enabling.

The reason is that Trump and his forces have taken command of the party. Anti-Trump Republicans can muster only rearguard actions, which we doubt can hold the line against a multiyear, multifront assault from Trump and his allies.

It is tempting to assume that this assault will fail. After all, Trump is unpopular, the Republican Party’s prospects in this year’s midterm elections are dim, and the president is under aggressive investigation. What’s more, democratic institutions held up pretty well in the first year of the Trump administration. Won’t they get us through the rest?

Perhaps. But we should not count on the past year to provide the template for the next three. Under the pressure of persistent attacks, many of them seemingly minor, democratic institutions can erode gradually until they suddenly fail. That the structures hold up for a while does not mean they will hold up indefinitely-and if they do, they may not hold up well.

Even now, erosion is visible. Republican partisans and policy makers routinely accept insults to constitutional norms that, under Barack Obama, they would have condemned as outrageous. When Trump tweeted about taking “NBC and the Networks” off the air (“Network news has become so partisan, distorted and fake that licenses must be challenged and, if appropriate, revoked”), congressional Republicans were quick to repudiate … left-wing media bias. In a poll by the Cato Institute, almost two-thirds of Republican respondents agreed with the president that journalists are “an enemy of the American people.” How much damage can Trump do in the next three years? We don’t know, but we see no grounds to be complacent.

The optimistic outcome depends to some degree on precisely the sort of oppositional partisanship we are prescribing. For Trump to be restrained going forward, key congressional enablers will need to lose their seats in the midterm elections to people who will use legislation and oversight to push back against the administration. Without such electoral losses, the picture looks decidedly grimmer.

Finally, we might not be talking about just three more years. Trump could get reelected; incumbent presidents usually do. In any event, he is likely, at a minimum, to be renominated for the presidency.

It’s Trump’s party now; or, perhaps more to the point, it’s Trumpism’s party, because a portion of the base seems eager to out-Trump Trump. In last year’s special election to fill a vacant U.S. Senate seat in Alabama, Republican primary voters defied the president himself by nominating a candidate who was openly contemptuous of the rule of law-and many stuck with him when he was credibly alleged to have been a child molester. After initially balking, the Republican Party threw its institutional support behind him too. In Virginia, pressure from the base drove a previously sensible Republican gubernatorial candidate into the fever swamps. Faced with the choice between soul-killing accommodation and futile resistance, many Republican politicians who renounce Trumpism are fleeing the party or exiting politics altogether. Of those who remain, many are fighting for their political lives against a nihilistic insurgency.

So we arrive at a syllogism:

If the syllogism holds, then the most-important tasks in U.S. politics right now are to change the Republicans’ trajectory and to deprive them of power in the meantime. In our two-party system, the surest way to accomplish these things is to support the other party, in every race from president to dogcatcher. The goal is to make the Republican Party answerable at every level, exacting a political price so stinging as to force the party back into the democratic fold. 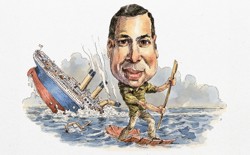 The off-year elections in November showed that this is possible. Democrats flooded polling places, desperate to “resist.” Independents added their voice. Even some Republicans abandoned their party. One Virginia Republican, explaining why he had just voted for Democrats in every race, told The Washington Post, “I’ve been with the Republicans my whole life, but what the party has been doing is appalling.” Trump’s base stayed loyal but was overwhelmed by other voters. A few more spankings like that will give anti-Trump Republicans a fighting chance to regain influence within their party.

We understand why Republicans, even moderate ones, are reluctant to cross party lines. Party, today, is identity. But in the through-the-looking-glass era of Donald Trump, the best thing Republicans can do for their party is vote against it.

This article appears in the March 2018 print edition with the headline “Boycott the GOP.”

We understand, too, the many imperfections of the Democratic Party. Its left is extreme, its center is confused, and it has its share of bad apples. But the Democratic Party is not a threat to our democratic order. That is why we are rising above our independent predilections and behaving like dumb-ass partisans. It’s why we hope many smart people will do the same.