While examining a deceased pygmy rattlesnake last summer, a Florida professor and a biology fellow were stunned as they watched wiggling parasitic worms slowly emerge from the serpent’s open mouth.

Dr. Terence Farrell, who teaches biology at Stetson University in DeLand, has been studying the venomous rattlesnake species for decades – and even he admits he found the scene “pretty alarming.”

“We conducted research and found that these types of parasites (pentastome) have never been found in pygmy rattlesnakes before,” Farrell said in a statement released by Stetson University on Friday.

Since then, Farrell and his students have tested a total of three pygmy rattlesnakes and found the same type of bloodsucking parasitic worms in each of the reptile’s lungs and near their tracheas. The researchers then collaborated with the University of Florida’s College of Veterinary Medicine to conduct tests on the creatures’ DNA to determine how the parasites were being introduced.

They discovered the parasite species appeared to be from southeast Asia, indicating they may be connected to Burmese pythons, a species native to that particular region that also happens to be an invasive species in the Sunshine State. They published their findings in the Herpetological Review in March. 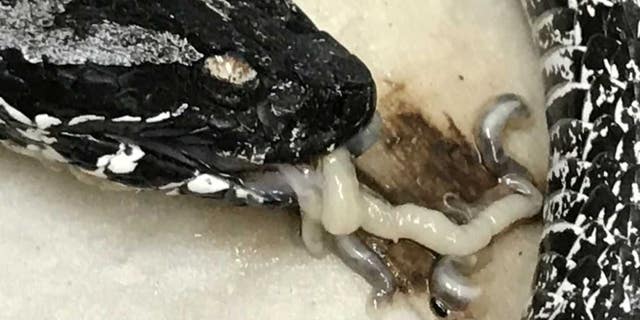 The Florida Wildlife Commission has been encouraging the public to “remove and kill pythons from private lands whenever possible.” The South Florida Water Management District even created a python elimination program in 2017 to protect the Everglades and eliminate the snakes from public lands.

“Tens of thousands of invasive Burmese pythons are estimated to be present in the Everglades,” the United States Geological Survey (USGS) says. Officials believe the snakes multiplied over the years, turning into an invasive species after careless pet owners released the exotic animals in swamps.

Though Burmese pythons are more heavily populated in the southern portion of the state, Farrell and his team say they’ve found evidence of the parasite up to 100 miles away in Central Florida.

“Our research shows that the parasites are moving north rapidly along the peninsula and appear to have some major health effects on pygmy rattlesnakes,” explained Farrell

At the moment, the parasites don’t appear to pose a threat to humans.

“There are relatives of this parasite that people have gotten by eating raw snakes. There isn’t a human health concern at this time,” Farrell confirmed to USA Today.

But the researchers are concerned about the impact it will have on pygmy rattlesnakes. 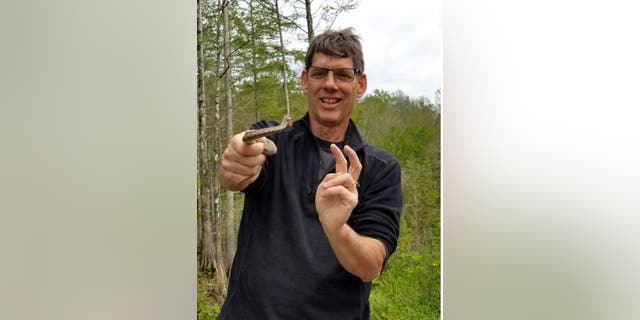 The possibility of the parasites spreading beyond Florida is even more cause for concern.

“The research tells us that there’s a whole new concern about invasive species and the diseases and parasites that they bring with them. This parasite isn’t just a Florida problem. We have no idea how much of the U.S. this parasite will spread and move into, which may cause it to become a nationwide problem in a few years,” Farrell added.