Washington’s apparent assault on big tech companies like Alphabet, Facebook and Amazon could be a blessing in disguise for investors as they present a massive buying opportunity.

Alphabet and Facebook shares fell 3.4% and 2.3%, respectively, for the week. Amazon was up 1.6%, but lagged the S&P 500’s 4.4% gain for the week. These moves come after the multiple reports sparked fears that some of these tech companies could face tough regulations in the future, or even be broken up.

Still, the chances of these companies being broken up are slim and their fundamentals point to further long-term growth. Hence, this sudden drop could be an entry point for investors looking for exposure to some of the best-performing stocks in recent years.

“I look at opportunities like this, when the market sells off, to either initiate or add to my positions,” said Kim Forrest, founder of Bokeh Capital. “These are not fads. These are the very foundations that you build your business on. These are, if you will, like the steel companies and oil companies of the 1950s and 1960s. I don’t see anything going away.”

Alphabet fell after multiple reports said the Justice Department was preparing an antitrust investigation into Google. Facebook came under pressure after The Wall Street Journal reported the Federal Trade Commission had clearance to investigate how the company’s practices impact competition. The Washington Post also reported the FTC and Justice struck a deal that put Amazon under the FTC’s microscope, putting pressure on the e-commerce giant.

The news came at a time when shares of the Google parent, Facebook and Amazon – which are some of the hottest stocks of the past five years – are showing some cracks. Alphabet is up more than 88% in the past five years, while Facebook is up 177%. Amazon shares have increased their value by 447% in that time. 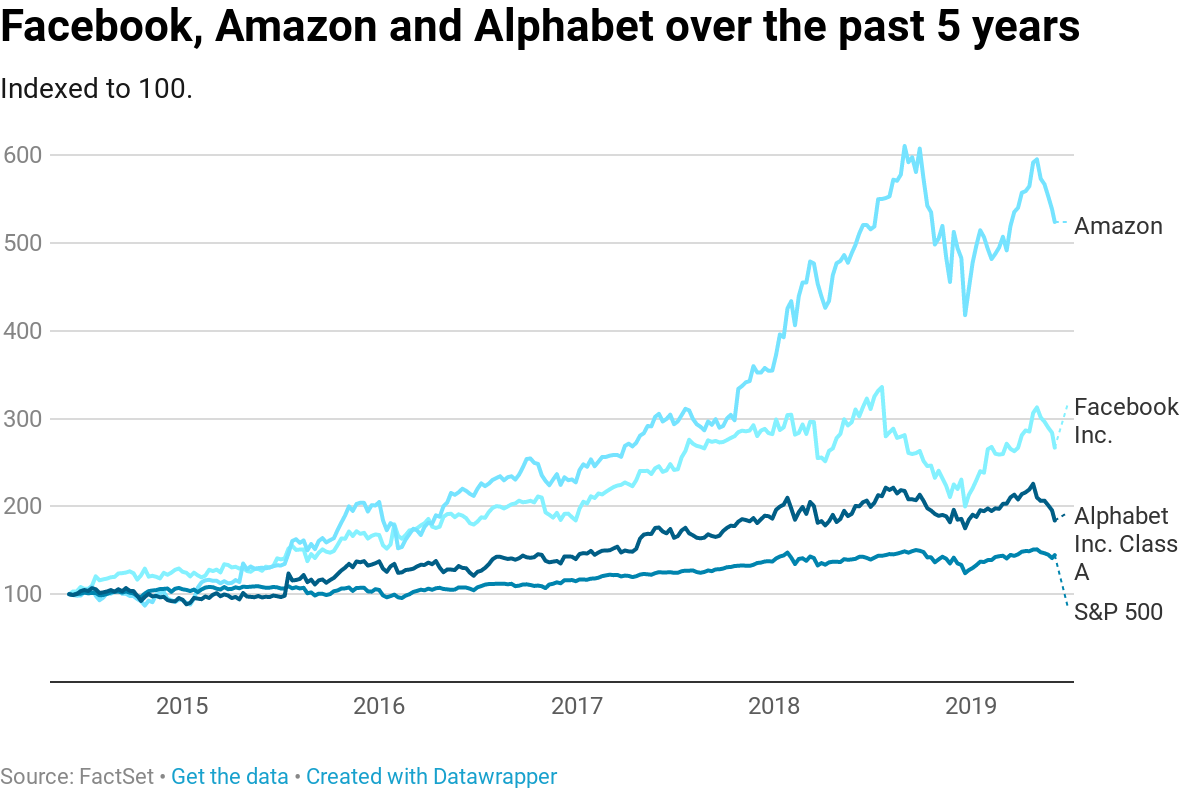 But their recent performance has been lackluster. Facebook shares are down 7.9% over the past 12 months while Alphabet has lost nearly 6% in that time. Amazon is the only one that’s positive in the past year, trading more than 6% higher. 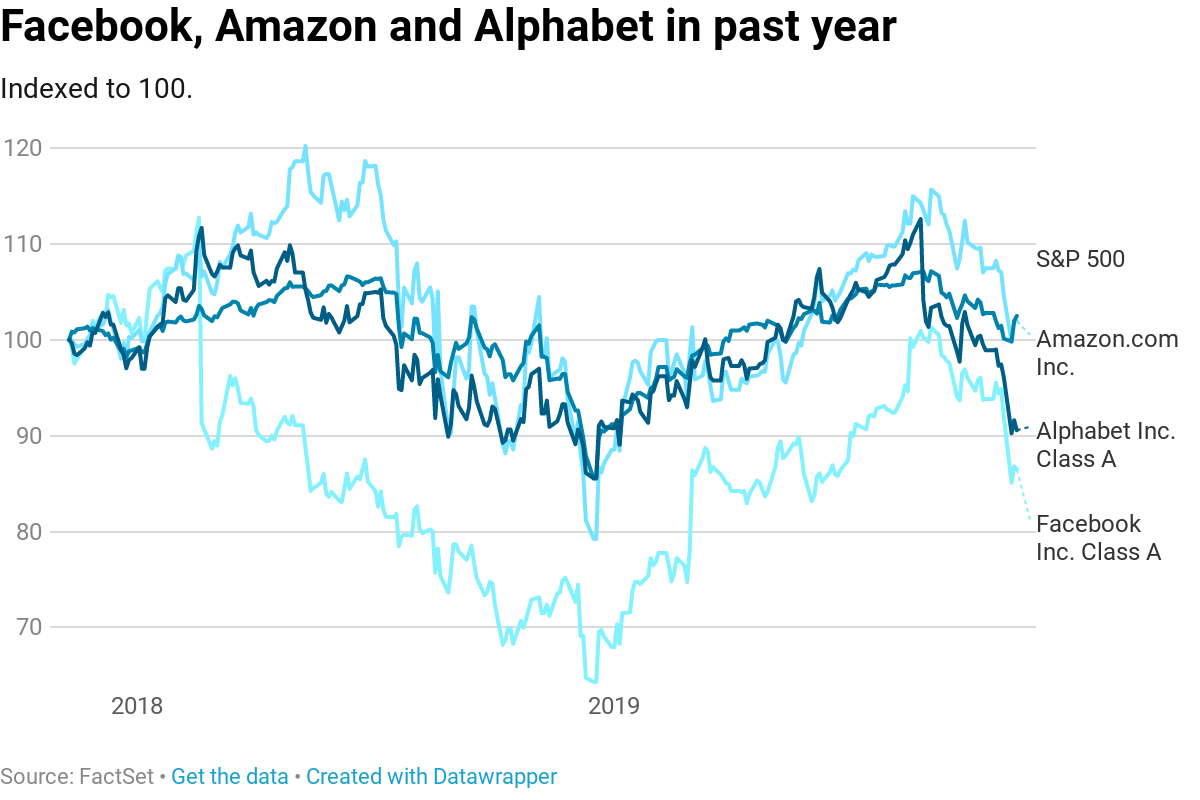 Tech has been “really taking it on the chin more than any other sector due to two reasons: One, because it’s been the most profitable sector in the last two years. It’s also a direct target of these tariffs,” said Jeff Kilburg, CEO of KKM Financial. The latest move down is a “digestion of whether Google and some of these tech giants will be broken up. I think the answer is no, but the fact that this is hitting front-page newspapers is putting some portfolios in a rebalancing perspective.”

Alphabet is trading at 26 times earnings, its cheapest multiple since 2015. Facebook’s price-to-earnings ratio sits near 25 after hitting an all-time low of 18.7 in late December.

Investors are fretting over the possibility of tech giants being broken up but the chances of that happening are low.

Baird tech analyst Colin Sebastian said in a note that Facebook and Google could find some legal “refuge” in the government’s regulatory emphasis on “consumer harm.”

“In terms of anti-competitive behavior, the fact that Google and Facebook services are largely free for consumers, and that the growth of Facebook and Instagram (and to a much lesser extent Amazon) created more competition for Google in recent years, would seem to dilute arguments that the ‘duopoly’ is unfriendly to consumers,” he said.

Investors can also look at the last time a major tech company faced antitrust litigation to find solace. Between 1998 and 2001, Microsoft was accused of monopolizing the computer operating-system market. The company settled with the U.S. government in November 2001 and its stock has surged nearly 300% in that time.

This, however, does not mean investors should throw caution to the wind with these stocks, especially in the near term as the political rhetoric around big tech companies and their power intensifies into the 2020 elections.

“The current political environment is ripe for significant antitrust enforcement, particularly for the high-flying FAANG stocks,” strategists at BCA Research said in a March note. “Whether it is election meddling, data privacy issues, perceived ideological bias, or large accumulation of wealth, Americans across the political spectrum are wary of the power of tech companies.”

But for investors who can stomach the volatility these stocks will likely face, this presents “an opportunity to buy,” according to Kilburg of KKM Financial.