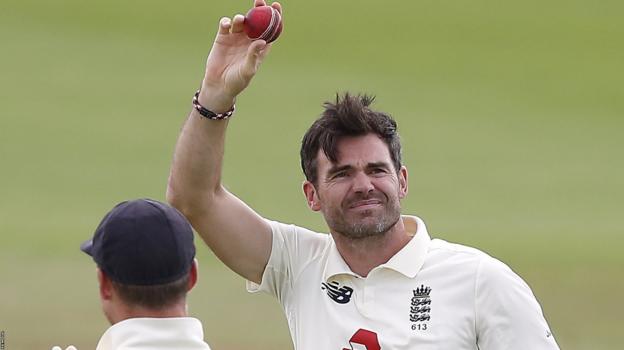 The 38-year-old achieved the milestone by having Azhar Ali caught at first slip on the fifth day of the final Test against Pakistan at the Ageas Bowl.

The Lancashire man made his Test debut in 2003 and has earned 156 caps.

He is fourth on the all-time list of Test wicket-takers, behind spinners Muttiah Muralitharan, Shane Warne and Anil Kumble.

Anderson began the third Test in Southampton on 593 wickets and bowled beautifully, exhibiting his mastery of swing and seam.

After taking 5-56 in the first innings and trapping Abid Ali lbw in Pakistan’s second innings, Anderson faced an anxious wait while stranded on 599.

The frustration was compounded by the fact Anderson had seen four catches dropped off his bowling during the match.

However, with his 14th delivery of the day, he found some extra bounce, with Azhar fending to Joe Root.

The performance in the third Test is the best of what has been a difficult year for Anderson. Injuries meant he was only able to bowl four overs in last summer’s Ashes series, then he was forced home early from England’s tour of South Africa.

Following the first Test against Pakistan, when he was below his best in returning match figures of 1-97, Anderson reiterated his desire to continue playing for England, saying he was still “hungry”.

Now he has achieved something that no bowler of his kind has done before, as well as joining one of cricket’s most exclusive clubs.

His milestone comes in the same summer that his long-term new-ball partner Stuart Broad took his 500th Test wicket.

“It’s just a phenomenal achievement,” Broad told BBC Sport. “He has got better with age and is someone who has inspired me throughout my career.

“He’s a role model to follow for every English cricketer and young cricketer coming through.

“He’s always searching to be better and better and 600 won’t be the stopping of him.”

Anderson made his Test debut against Zimbabwe 17 years ago and has played under eight different captains, as well as being part of four Ashes-winning teams.

“We are witnessing true greatness,” said Michael Vaughan, who captained Anderson in 21 Tests.

“I never in my wildest dreams thought 17 years later we’d be talking about him getting to 600.”

Australian legend Glenn McGrath previously held the record for most wickets taken by a fast bowler with 563, a mark Anderson passed in 2018.

“I didn’t have the skill level that Jimmy has,” said McGrath. “When he’s swinging that ball, both ways, in control, there’s no one better.”

“He’s set the bar a bit like Sachin has,” said McGrath.

“No one is ever going to catch Sachin in Test cricket for the amount of runs he’s scored and the matches he’s played.

Anderson has also played 194 one-day internationals and 19 Twenty20s for England.

Overall, he has taken 887 international wickets across the three formats, which is sixth on the all-time list.