(( Apple NASDAQ:AAPL) Pay recently surpassed Starbucks‘ NASDAQ:SBUX) mobile app as the top proximity mobile payment platform in the U.S., according to eMarketer. The research firm expects Apple Pay to account for 47.3% of that market this year, while Starbucks slips to second place with a 39.4% share. 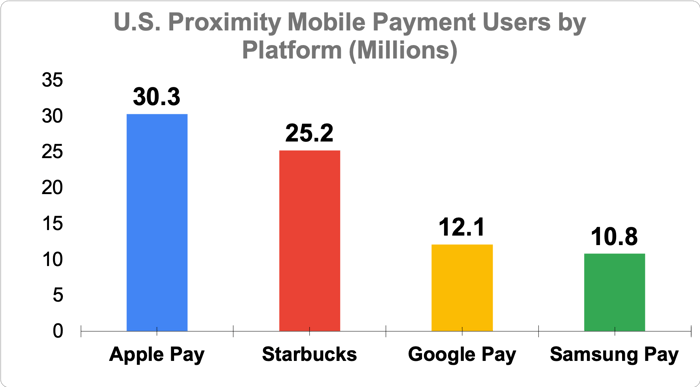 eMarketer attributes Apple Pay’s growth to the rapid adoption of the near-field communications (NFC) standard across brick-and-mortar retailers. It notes that Google’s and Samsung‘s platforms use the same standard, but that the two companies are splitting the Android market.

The iPhone maker controls 41% of the U.S. smartphone market, according to Counterpoint Research, making it tough to ignore Apple Pay as a payment option. That’s why Digital Trends expects 70% of U.S. retailers to support Apple Pay by the end of the year.

This isn’t necessarily bad news for Starbucks, which also supports Apple Pay as a payment option. There’s also plenty of room for growth, since eMarketer estimates that only 30% of U.S. smartphone users will use mobile payments this year. Nonetheless, companies with an early foothold in this market — like Apple and Starbucks — could profit and lock more users into their cashless ecosystems.