A week after the fatal shootings at Marjory Stoneman Douglas High School in Parkland, Florida, some of the high school’s surviving students traveled to Tallahassee, Florida, and Washington, D.C., to protest lawmakers who failed to pass gun-control legislation. These teenagers have become passionate advocates for change.

Emma Gonzalez, a senior at Marjory Stoneman Douglas, had a memorable explanation for why she and others had to speak out: “Every single person up here today, all these people should be home grieving,” she said. “But instead we are up here standing together because if all our government and president can do is send thoughts and prayers, then it’s time for victims to be the change that we need to see.”

Another group is speaking out, too: people who believe the deadly shooting at Marjory Stoneman Douglas was staged, and that students like Gonzalez are actors, not victims. Far-right provocateurs have focused on David Hogg, a 17-year-old student who had the self-possession to interview his classmates while the shootings were taking place. Hogg’s composure in interviews, his criticism of President Donald Trump, and the fact that his father is a retired FBI agent have fueled a conspiracy theory that claims Hogg has been paid-by Hillary Clinton, George Soros, or favorite figures among conspiracy theorists-to promote an anti-gun agenda. Supported by media figures like Rush Limbaugh and Bill O’Reilly, the conspiracy theories have received a big boost from YouTube, with its algorithms that push videos targeting Hogg to the top of trending video lists.

It gets stranger. These two groups-the brave students demanding to prevent another tragedy, and those denying their very existence from behind computer screens-have something profound in common.

They’re both responding to the dominant condition of our nation today: mistrust. 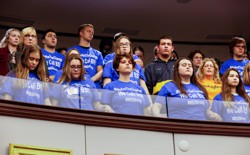 In the mid-1960s, 77 percent of Americans reported trust in the U.S. government to do the right thing all or most of the time, according to surveys from Gallup and the National Elections Survey. Asked the same question in a Gallup poll late last year, only 18 percent reported trusting the government. This isn’t a Trump-specific phenomenon. Trust has been falling in the United States for decades, and it hit comparably low points during the Clinton and Obama presidencies.

It’s also not a government-specific phenomenon. Trust in virtually all American institutions is down sharply since the 1960s and 1970s, including people’s faith in banks, churches, healthcare, and big business. Our loss of trust in government, in media, and in each other helps explain this peculiar moment, a time when some of us can’t believe the government’s inability to take action and others can’t believe what they’re seeing.

The students at Marjory Stoneman Douglas are discovering that they can’t trust their elected officials to take action on gun control. And why should they? The Columbine massacre occurred in 1999, before any of these children were born. Legislators have had 18 years to ensure that American schools are safe places for students to learn. Instead, students are so familiar with drills to protect themselves from mass shootings that one enterprising high schooler, Justin Rivard, has designed a metal brace that can secure a classroom door from an active shooter who blasts off a lock. Tragically, Rivard’s clever hack has a much better chance of being adopted than legislation to institute universal background checks, which 97 percent of Americans support.