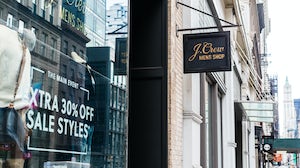 US Bankruptcy Judge Keith Phillips confirmed the plan in a virtual hearing, overruling objections from some landlords and the U.S. government's bankruptcy watchdog. Phillips said J. Crew's plan conforms to federal bankruptcy rules and thanked the company's stakeholders for coming to a "largely consensual" deal - most of the retailer's creditors support the plan.

The retailer expects to officially exit bankruptcy in September, according to a statement. To do so, it'll swap more than $1.6 billion of old secured debt for ownership in the company. The plan also provides for a new $400 million credit facility and will turn J. Crew's bankruptcy loan into $400 million of term loans.

The purveyor of preppy fashion filed for bankruptcy in Virginia in early May, the first major retailer to do so during pandemic-related shutdowns, though its problems pre-date Covid-19. The bankruptcy plan will wipe out equity stakes of TPG Capital LP and Leonard Green & Partners LP, which bought J. Crew in a 2011 leveraged buyout.

The company operates 170 J. Crew stores - down from 181 at the start of the case - along 141 Madewell stores. Before furloughing most of its employees in April, the company employed about 13,000 around the world. The "vast majority" of its store associates had returned to work as of Aug. 9.

By Jeremy Hill
Prev Next