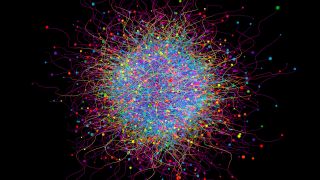 Physicists set a new record by linking together a hot soup of 15 trillion atoms in a bizarre phenomenon called quantum entanglement. The finding could be a major breakthrough for creating more accurate sensors to detect ripples in space-time called gravitational waves or even the elusive dark matter thought to pervade the universe.

Entanglement, a quantum phenomena Albert Einstein famously described as "spooky action at a distance," is a process in which two or more particles become linked and any action performed on one instantaneously affects the others regardless of how far apart they are. Entanglement lies at the heart of many emerging technologies, such as quantum computing and cryptography.

Entangled states are infamous for being fragile; their quantum links can be easily broken by the slightest internal vibration or interference from the outside world. For this reason, scientists attempt to reach the coldest temperatures possible in experiments to entangle jittery atoms; the lower the temperature, the less likely atoms are to bounce into each other and break their coherence. For the new study, researchers at the Institute of Photonic Science (ICFO) in Barcelona, Spain, took the opposite approach, heating to millions of times hotter than a typical quantum experiment to see if entanglement could persist in a hot and chaotic environment.

"Entanglement is one of the most remarkable quantum technologies, but it is famously fragile," said Jia Kong, a visiting scientist at ICFO and lead author of the study. "Most entanglement-related quantum technology has to be applied in a low-temperature environment, such as a cold atomic system. This limits the application of entanglement states. [Whether or not] entanglement can survive in a hot and messy environment is an interesting question."

Things get hot and messy

The researchers heated a small glass tube filled with vaporized and inert gas to 350 degrees Fahrenheit (177 degrees Celsius), coincidentally the perfect temperature to bake cookies. At this temperature, the hot cloud of rubidium atoms is in a state of chaos, with thousands of atomic collisions taking place every second. Like billiard balls, the atoms bounce off each other, transferring their and spin. But unlike classical billiards, this spin does not represent the physical motion of the atoms.

In quantum mechanics, is a fundamental property of particles, just like mass or electric charge, that gives particles an intrinsic angular momentum. In many ways, the spin of a particle is analogous to a spinning planet, having both angular momentum and creating a weak magnetic field, called a magnetic moment. But in the wacky world of quantum mechanics, classical analogies fall apart. The very notion that particles like protons or electrons are rotating solid objects of size and shape doesn't fit the quantum worldview. And when scientists try to measure a particle's spin, they get one of two answers: up or down. There are no in-betweens in quantum mechanics.

Fortunately, the tiny magnetic fields created by a particle's spin allow scientists to measure spin in a number of unique ways. One of those involves polarized light, or electromagnetic waves that oscillate in a single direction.

Related: The 12 most stunning and important quantum experiments of 2019

The researchers shot a beam of polarized light at the tube of rubidium atoms. Because the atoms' spins act like tiny magnets, the polarization of the light rotates as it passes through the gas and interacts with its magnetic field. This light-atom interaction creates large-scale entanglement between the atoms and the gas. When researchers measure the rotation of the light waves that come out the other side of the glass tube, they can determine the total spin of the gas of atoms, which consequently transfers the entanglement onto the atoms and leaves them in an entangled state.

"The [measurement] we used is based on light-atom interaction," Kong said. "With proper conditions, the interaction will produce correlation between light and atoms, and then if we do correct detection, the correlation will be transferred into atoms, therefore creating entanglement between atoms. The surprising thing is that these random collisions didn't destroy entanglement."

In fact, the "hot and messy" environment inside the glass tube was key to the experiment's success. The atoms were in what physicists call a macroscopic spin singlet state, a collection of pairs of entangled particles' total spin sums to zero. The initially entangled atoms pass their entanglement to each other via collisions in a game of quantum tag, exchanging their spins but keeping the total spin at zero, and allowing the collective entanglement state to persist for at least a millisecond. For instance, particle A is entangled with particle B, but when particle B hits particle C, it links both particles with particle C, and so on.

This "means that 1,000 times per second, a new batch of 15 trillion atoms is being entangled," Kong said in a statement. One millisecond "is a very long time for the atoms, long enough for about 50 random collisions to occur. This clearly shows that the entanglement is not destroyed by these random events. This is maybe the most surprising result of the work."

Because the scientists are only able to understand the collective state of the entangled atoms, the application of their research is limited to special uses. Technologies like quantum computers are likely out of the question, since the state of individually entangled particles needs to be known to store and send information.

However, their results may help to develop ultra-sensitive magnetic field detectors, capable of measuring magnetic fields more than 10 billion times weaker than Earth's magnetic field. Such powerful magnetometers have applications in many fields of science. For example, in the study of neuroscience, magnetoencephalography is used to take images of the brain by detecting the ultra-faint magnetic signals given off by brain activity.

"We hope that this kind of giant entangled state will lead to better sensor performance in applications ranging from brain imaging, to self-driving cars, to searches for dark matter," Morgan Mitchell, a professor of physics and the lab's group leader, said in the statement.

Their results were published online May 15 in the journal Nature Communications.