Despite President Trump’s continued insistence that all schools reopen for in-person learning, the country has already experienced some concerning setbacks while preparing for the academic year, with Georgia’s largest school district confirming over the weekend that more than 250 employees have either tested positive for Covid-19 or been exposed to the virus.

Georgia’s Gwinnett County Public School teachers began in-person pre-planning last Wednesday, yet, within 24 hours, approximately 260 employees had been excluded from work due to a positive Covid-19 result or contact with a case.

According to the Atlanta Journal-Constitution, teachers have anonymously reported that in-person training and meetings are taking place without areas being disinfected, and masks aren’t being worn at all times, while others claimed that their school still hadn’t received any hand sanitizer.

Last Thursday, a junior high school in Greenfield, Indiana, reopened for the first time since March and, within hours, a student who attended multiple classes tested positive for the coronavirus.

Despite a continued rise in the number of Covid-19 cases and deaths in recent weeks, President Trump has steadfastly maintained that it is essential that schools reopen nationwide, which is believed to be a precursor to revitalizing the U.S. economy.

Trump, who has threatened to withhold federal funding from districts that do not resume in-person classes, tweeted Monday morning, “Cases up because of BIG Testing! Much of our Country is doing very well. Open the Schools!”

In an interview on CNN’s State of the Union, on Sunday, White House coronavirus response coordinator Dr. Deborah Birx warned the pandemic is ” extraordinarily widespread” in the U.S. and acknowledged that outbreaks would need to be held in check before schools can safely reopen.

“If you have a high caseload and active community spread, just like we are asking people not to go to bars, not to have household parties, not to create large spreading events, we are asking people to distance-learn at this moment so we can get this epidemic under control,” said Dr. Birx.

Trump and other prominent Republicans advocating for the resumption of in-person learning have argued that kids don’t easily transmit Covid-19. During a press briefing in late July, the president claimed that “a lot of people” say children “don’t transmit” the virus. “They don’t catch it easily; they don’t bring it home easily,” Trump asserted. However, new evidence contradicts that claim. Two new studies (one report citing findings from a pediatric hospital in Chicago and another conducted in Trento, Italy) both concluded that young children transmit SARS-CoV-2 efficiently, and could potentially even be drivers of the pandemic. An overnight camp in Georgia that did not require campers to wear face masks recently experienced a frightening coronavirus outbreak. The Centers for Disease Control and Prevention examined the cases at that camp and found 260 campers and staff (nearly half the camp) had been infected. As part of a related study released last Friday, CDC research shows children are susceptible to the virus and “play an important role in transmission.” According to the New York Times, 19 of the nation’s 25 largest school districts have announced they will start the upcoming academic year remotely. St. Andrew’s Episcopal, the Maryland school attended by President Trump’s youngest son, Barron, has received an order prohibiting on-campus learning for the start of the school year.

Last week, the American Federation of Teachers, the second-largest teachers’ union in the U.S., declared they would support “safety strikes” as “a last resort” if proper safeguards were not in place to protect educators in districts reopening for in-person education. “If authorities don’t protect the safety and health of those we represent and those we serve, nothing is off the table,” said Union President Randi Weingarten. “Not advocacy or protests, negotiations, grievances or lawsuits, or, if necessary and authorized by a local union, as a last resort, safety strikes.” 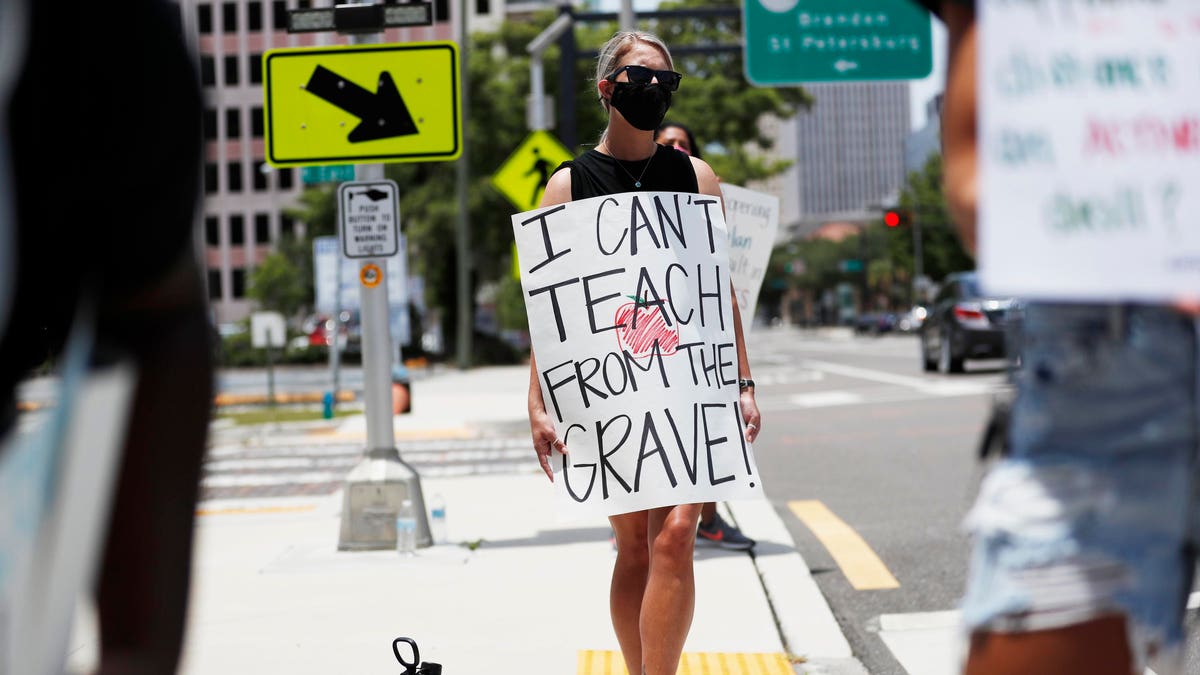